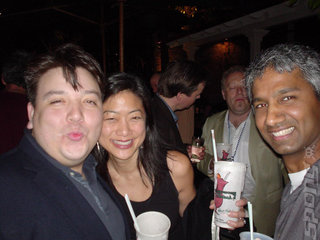 A Mobliss party, apparently...
Former Nintendo executive Jim Merrick has popped up in a new role at Mobliss, the emerging mobile services and games provider. Merrick was head of Nintendo's online strategies at Nintendo before his move to Germany and NoE.

Merrick takes the role of President and CEO at Seattle-based Mobliss starting today and will oversee game licensing and development, mobile messaging and Mobliss' SMS voting platform, which the company has been heavily touting of late.

Why Merrick left Nintendo was unclear, though we can shed some light on the events that saw a significant reshuffle at Nintendo of Europe. According to senior sources, Merrick allegedly fell foul of German pension taxation legislation. Had he stayed at NoE, a significant, undisclosed sum would have been lost, so a relocation to Seattle and Nintendo of America was planned. However, upon his return to the US, it seems there wasn't a role for Merrick, with a period of silence preceding the surprise announcement that the long-time executive was leaving the firm.

Take a look at full news of what happened at Nintendo Europe as well as an amusing tale of a chance meeting with a rather grumpy Merrick in a lift at E3.