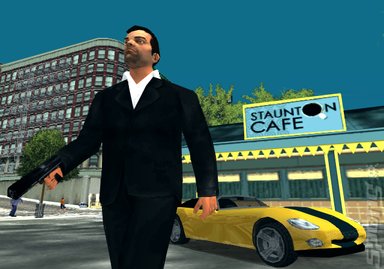 All Images (3) »
If this is Tuesday, it must be time for some chart news. The All Formats chart as supplied by ChartTrack has a new number one this week, with Grand Theft Auto: Liberty City Stories beating off all competition.

With the surge in sales down to last week's newly-released PS2 version, itself taking 96% of the title's sales, it's no real surprise that the game bestrides the chart like the priapic miasma of sex and violence that up until last Friday only PSP owners could experience. The size of your console matters after all.

The week's best placed new entry is this year's Madagascar, the multi-formatted Over the Hedge from Activision, in at 12. The rest of this week's All Formats chart reveals a 'falling off' in the appeal of motorcycling, with MotoGP 06 and Tourist Trophy, the former plummeting from number seven to 23, the latter dropping five places to 24.

Puzzlingly, recent office favourite LocoRoco only pops up at 25, instead of gatecrashing the top ten like some here reckon it should. More puzzle action enters at 29, with Tetris DS showing its L-shaped self. Ooh, now it's T-shaped?hang on, another L-shape?blimey! Anyway, we gave Tetris DS a really good review and expected it to do better than this. What's wrong with you people? Ah, you're waiting for a DS Lite.

In a rare departure from All Formats chart happenings, we feel compelled to bring you news from the PC chart. Number 18 in the PC chart, to be precise. An improbably high new entry in any other week surely, Ship Simulator 2006 - yes! - lets you take control of tugboats, speedboats, yachts, water taxis and even the mighty Titanic. No pedalos, however. We thought flight sims were, erm, shall we say odd. Train sims too. But Ship Simulator 2006 in at 18? What's the world coming to? There's a war on, you know. And the FIFA World Cup. But no, some people just want to see how close they can get to that iceberg...
Companies: Rockstar North
Games: Grand Theft Auto: Liberty City Stories LocoRoco MotoGP '06 Over the Hedge Ship Simulator 2006 Tetris DS Tourist Trophy: The Real Riding Simulator