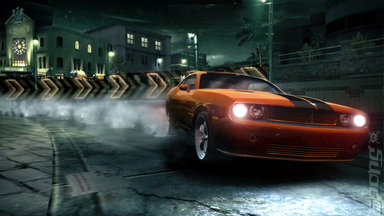 All Images (3) »
SPOnG brought you the first details about Need for Speed Carbon, EA?s next version of their mega-selling racing series, earlier this week. Now EA has just made the first official announcement on the game, releasing the screens which you can see right here, along with a short teaser trailer.

Bets are already being placed in the SPOnG office that this is going to be the Christmas number one for 2006. The Nintendo hardcore in the backroom are convinced that Twilight Princess will beat EA?s showy racer to the coveted Christmas number one slot, but the rest of us have suspected for some time that the Zelda fanboys seem to live in some kind of fantasy world.

So, back to Need for Speed: Carbon. What?s new? Let?s allow Carbon?s producer, Larry Lapierre to tell us.

"We pride ourselves on our ability to reinvent the franchise and continually uncover new and exciting trends in car culture," says Lapierre. "Canyon Racing is a real test of a driver's skill and we think it provides a fantastic game play opportunity to lean into."

The accompanying press release outlines more info on the game, informing us that: ?Need for Speed Carbon immerses you into the world's most dangerous and adrenaline-filled form of street racing. You and your crew must race in an all-out war for the city, risking everything to take over your rivals' neighbourhoods one block at a time. As the police turn up the heat, the battle ultimately shifts to Carbon Canyon, where territories and reputations can be lost on every perilous curve.?

Sounds good to SPOnG. To be honest, we were getting a bit down, spending all that time tearing around grimy ghettos. It will do us good to get out for a spin in the country.

Of course, customization is still at the heart of the game, and we are duly promised that: ?Need for Speed Carbon delivers the next generation of customization giving you the power to design and tweak your crew's cars in every way using the ground-breaking new Autosculpt(TM) technology.?

Autosculpt eh? That?s a cracking word. SPOnG loves it when developers fuse two often seemingly random words together to make their technology sound like it?s 'proper hardcore'. Is this a way to carve out personalised car body work, or is a something that sculpts itself?

Need for Speed: Carbon is being developed by EA Black Box in Vancouver, British Columbia and is due out on Xbox 360, PlayStation 3, Wii, PS2, Xbox, GameCube, DS, GBA, PSP and PC in November.

Check out the teeny-tiny teaser trailer here for a little taster. One can almost smell the burning rubber amidst the pine cones - a close second to napalm in the morning.