The Glastonbury of the gaming calendar announced 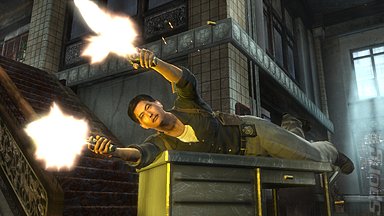 All Images (10) »
Microsoft has just sent us our invitation and the first details on its annual European X0 brand and gaming showcase gig, X06. The event takes place in the sunny, laid-back Catalan capital of Barcelona on September 27 and 28 this year. The cream of Europe's development, publishing and games media talent will all be along for the jolly. SPOnG will also be there.

Each year?s event promises to bring something world-shatteringly new the world of gaming, not to mention some hilarious or near-death experience amongst the hapless SPOnG stringers who manage to make it out for the annual press trip.

Last year?s trip involved some interesting and (third)eye-opening experiences for our intrepid young fella on the ground and the less said about Pat and Stefan?s frighteningly dangerous skinny dipping at X03 the better.

So providing our man on the ground manages to stay both sober and alive this year, we?ll be telling you all about the latest Xbox 360, Xbox Live Arcade and PC hardware and software news. Announced for X06 are (in no particular order); Halo 3, Gears of War, Alan Wake (one of our favourites from E3), Forza 2 and Stranglehold.

We hope, nay, expect news on GTA IV, along with updates on the planned Xbox Live Anywhere service we heard so much about in LA last month. Furthermore, we expect announcements on price cuts for Xbox 360 in time for a PS3-spoiling Christmas 06. Oh, and some more stuff on HD-DVD.

Speaking about X06, Chris Lewis, Microsoft's regional Vice President for EMEA rolled out a quality corporate PR quote, a real beauty: "We are really looking forward to X06 in Barcelona and believe this will prove to be an amazing experience for gaming enthusiasts across Europe. We have some exciting announcements to make and even more to show people. X06 will firmly place Xbox 360 as the console of the next generation."