Tony Hawk's Project 8: Get the Facts 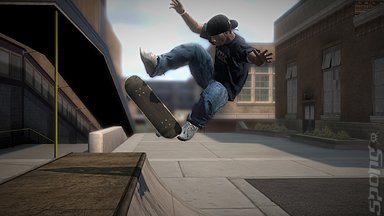 All Images (9) »
The THPS fanbase was having to cobble together pieces of hearsay to make tangible NeverSoft's next Tony Hawk game, a complete revision of the series that until now has remained tightly under wraps. Regular readers will already have seen the first images in our news yesterday.

We're pleased to tell you that the wait is over, as publisher Activision has now released a full fact sheet on the game. You can tell it's from the publisher because it talks about 'product' - always a dead giveaway.

Re-engineered from the ground up for Sony and Microsoft?s next-generation consoles, Tony Hawk?s Project 8 immerses players in the definitive skateboarding experience using ultra-realistic graphics, enhanced physics and extremely responsive controls that simulate the feeling of skating with every trick and bail. The game challenges players to experience the intensity and pressure of skating against some of the world?s top pros in true to life competitions as they aim to become the #1 skater and establish their town as a skateboard destination. Delivering continuous skating action in a free-roaming living environment, Tony Hawk?s Project 8 incorporates the series? most popular features, all of which have been enhanced with next-generation technology.

Next Generation Gameplay Brings Skateboarding to Life: Tony Hawk?s Project 8 is built from the ground up with an entirely new engine for Sony and Microsoft next-generation consoles and features the most advanced graphics ever for a Tony Hawk game, including full 3D body scans of pro athletes and motion captured skateboard tricks. Gamers have the freedom to progress through the game in multiple ways and decide the type of pro skate they want to be.

Filmer and Photo Goals ? On the way to #1 pro-skater status, players must trick through photo shoot locations, or follow a filmer with a video camera and complete his instructions while keeping up with him.

?Picture-in-a-Picture? ? Player can watch gameplay unfold on the main screen while observing the action on film in a superimposed video box.

?Movable Ramps and Rails throughout the city? ? Place ramps and rails to set up amazing lines and/or gain access to secret spots.

?Impress the Locals? ? For the first time ever, players must impress in-game citizens and pedestrians to build up respect. The pedestrians watch players perform tricks, laugh at brutal bails and punch players in the gut for knocking into them.

Enhanced Physics and Responsive Controls: The new physics system introduces advanced grinds and bails that allow players to control falls and minimize or maximize damage for fun with the innovative new ragdoll bail mode. A greater sense of momentum and gravity is impossible to miss, and provides the most realistic virtual skate experience ever.
Companies: Neversoft
Games: Tony Hawk's Project 8