The previously unknown game of ?soccer? is a phenomenon! 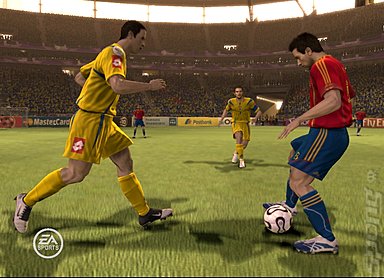 All Images (9) »
This week's ELSPA/ChartTrack charts report that game sales are up, which is good news seeing as last week's recorded UK sales of entertainment software were at a three year low.

And whilst the sun continues to shine across England?s green and pleasant land (not to mention on the rather more grim streets of Wakefield and north London that the SPOnG team gaze up) sales of handheld games have been doing particularly well this week, what with a new version of Nintendogs released and a successful second week for Dr Kawashima?s Brain Training.

SPOnG can only hope that thousands of fathers across the UK received a DS along with Brain Training for Father?s Day yesterday, raising the mean IQ of grown men across the land - something that always seems to decrease worryingly at times of international football competitions. Indeed, the presence of St. George's flags atop one?s car serves but one purpose only ? it says to other drivers: ?Here, right in this car, is a complete numpty. Don?t bother talking to them or interacting with them in any way.?

Lots of people, whilst we are on the matter, keep buying Electronic Arts? FIFA World Cup Germany 2006, which is the main reason why it is still number one in the All Formats Top 40. It?s been number one for six out of the last eight weeks now.

One could, if being extremely cynical, suggest that a games company could almost release anything vaguely football-related at times such as this, to make a quick buck. Codemasters is doing very well, we note, with Sensible Soccer 2006 hopping up one spot to number six from last week's seven. Konami is also rubbing it?s hands with footy cash-in glee, with Pro Evolution Soccer 5 still at number five due to continuing success of World Cup promotions with retailers.

Elsewhere in the world of selling anything in anyway football-related to football-hungry punters, deliriously high on a tabloid diet of Rooney?s feet, Beckham?s fringe-flick and Crouch?s robotic antics, we see Eidos? Championship Manager 2006 and Sega?s Football Manager 2006 both jump five places back up the chart, re-entering the top ten at numbers nine and ten respectively.

Looking at normal, non-football games, Eidos maintains its strong chart presence with Hitman: Blood Money holds onto its number two position and Tomb Raider: Legend sticking at number three. For Nintendo, it is a diamond week, where three DS-exclusives in the top 20; Dr. Kawashima?s Brain Training climbs up two positions to number four, Animal Crossing: Wild World up one place from number nine to eight and new entry Nintendogs: Dalmation and Friends straight in at 12.

Tune in next week for news on this week's big releases, GTA: Liberty City Stories for PS2, the fabulous LocoRoco on PSP, Full Spectrum Warrior: Ten Hammers on PC, PS2 and Xbox and Over the Hedge on every platform under the sun.