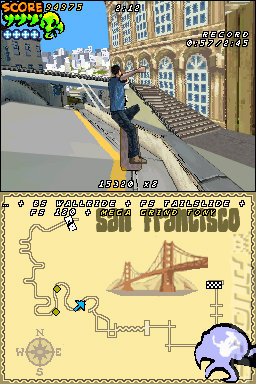 All Images (4) »
One of SPOnG's favourite street sports back in the day was the hardcore and less commercial end of the 1970's and 1980's skateboarding booms - downhill skating.

Skating at high speeds downhill gives an adrenalin-rush like no other we've experienced in our lives. And although we had to give up our downhilling fun early on in our skateboarding career (due to an unfortunately placed old lady and her daft mutt on a very steep hill in Scarborough) we still remember the awesome mix of wind speed and pant-soiling fear that we might die at any minute.

These days the closest we get to that rush is watching old Powell Peralta videos or snowboarding down a steep mountain, off-piste in freshly laid powder. The speed and sense of total freedom are still there, although the fear factor is reduced considerably, as there is little chance of grazing your arm off if you fall into 2 metre deep soft powder snow.

With all this in mind, we have high hopes indeed for the forthcoming Tony Hawks Downhill Jam on Nintendo GBA, DS and Wii, all due out later this year. And here, to whet our appetites for a downhill skateboarding experience that doesn't involve cheating death, is a bunch of new screens on the Vicarious Vision's developed DS version of the game.

It's a bold move forward for the series away from the tried-and-tested confines of the street scenes, half-pipes and skate-parks of previous versions of the game. Plus SPOnG also likes the cel-shaded aesthetic, so this is one we'll be pestering Activision to give us a play on as soon as they deem it to be in a fit state to show off.

Details on the game are scarce at the moment - other than you'll be able to play as Tony himself or a number of other characters, or create your own skater. You'll also have the option of using current boards, old school "fishtails," or long boards plus the choice of straightforward head-to-head racing, trick courses or the slalom.

And whilst we look forward to screaming down the hilly streets of San Francisco, Machu Picchu and Hong Kong, we would urge Activision to consider Scarborough as a suitable venue in the next version. If it wasn't for that daft old biddy and her Yorkshire Terrier nearly killing us, we'd probably not still have the fear about tackling that hill again. In the video game version we'd probably be able to ollie onto her head and gain extra points whilst doing it.