EA’s officially-licensed franchise dribbles back up 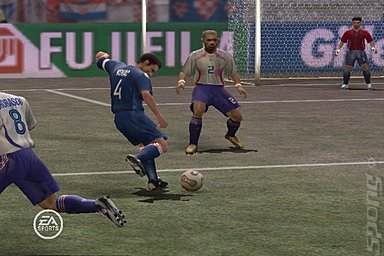 All Images (5) »
You may not be aware, but a certain football competition kicked off last Friday, and it seems that there is a modicum of support for our national team in what people are referring to as ‘The World Cup’.

Luckily, those clever fellows at Electronic Arts also have a videogame available right now called, would you believe it, ‘FIFA World Cup Germany 2006’. What a stroke of luck!

Yes, you guessed it, football mania has catapulted EA's officially-licensed franchise back up the All Formats Top 40 chart. Having spent the previous two weeks hovering near the top at the number two spot, it's now back at number one

This despite sales dropping off by around a third across the board due to the aforementioned World Cup, the arrival of a ‘scorchio’ Summer and the start of the dreaded school’s exams season. This is all well and good for football fans, sun worshippers and concerned parents, but not so hot for the UK games industry, which sees the biggest fall in sales since back in mid-2003.

Predictably, there are a number of other football games in the top ten this week, with Konami’s reduced-price Pro Evolution Soccer 5 falling down the chart one place to number five, whilst Codemasters' super arcade revival, Sensible Soccer 2006 shoots and scores, straight in at number seven this week.

Highest new entry of the week is THQ’s Moto GP ’06 for Xbox 360, which jumps straight in at number four - great news for bike racing enthusiasts, who can now snap up the best online motorbike racing experience money can buy.

Following closely behind, in at number six, is Nintendo’s Dr Kawashima’s Brain Training on DS. It's a superb launch to Nintendo’s summer Touch! Generations marketing campaign, which targets non-traditional and lapsed gamers with an entirely new and more accessible type of gaming experience.

Back to the top five, it’s another good week for Eidos with Hitman: Blood Money and Tomb Raider: Legend at numbers two and three respectively. Their management sim, Championship Manager 2006, also continues to milk the football gravy train, remaining in the top twenty at number fourteen this week, down four places from the previous week.

Finally, at the bottom of the top ten, we have EA/Valve’s Half Life 2: Episode One holding onto the number eight spot. If the Steam digital downloads of the game were taken into consideration, it would be interesting to see what the actual position of Episode One would be in the chart. SPOnG suspects it would be giving FIFA a good run for its money.