Biggest projectors in the UK apparently... 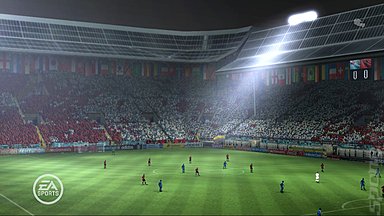 All Images (7) »
Well, it certainly seems that the summer of 2006 is well and truly upon us. When videogame companies start sponsoring outdoor events and actively encourage their punters to leave the house, then we have to begrudgingly accept that it's probably worth getting out a bit to get a bit of sun in the next week or two. It may be all the summer we get here in Blighty.

Following on from RedOctane encouraging Guitar Hero players to get out to rock festivals over the summer and have the opportunity of playing its awesome game live on stage, Microsoft carries on the tradition, encouraging gamers to get out to one of its 'Xbox 360 Believe' World Cup screenings, which kick off this Saturday bang in the centre of London's fashionable East End (Barleyville) at the Truman Brewery, where you can watch England's first game against Paraguay on the UK's largest projector screen.

Why are they doing this, other than to tap into the most popular thing on earth right now, you may wonder? They are doing it because Xbox is the official licensed video console of the 2006 FIFA World Cup. The list of officially licensed 'things' of the the 2006 FIFA World Cup must be longer than the queue for the good lavs at Glastonbury. But it would seem that neither Sony PlayStation nor Nintendo Wii are on that list.

Xbox even has a dedicated football site at www.xbox.com/football providing World Cup news, plus news on the Xbox Cup and Xbox 5's, the UK's largest 5-a-side tournament.

Microsoft's PR company has also sent us a nice invite to come along and film the first World Cup game on their big screen. SPOnG suspects this is part of some post-modern, ironic art 'joke', because if they do actually attract any media there to film England's first game on a screen then we would suggest you do the only right and noble thing and laugh loudly at them.

See you in Barleyworld at 2PM this Saturday. Paraguayans are advised to give the area a wide berth.

In the meantime, if you don't own a 360 yet, you might want to go and grab one from Gamestation, who are offering the console, a copy of 2006 FIFA World Cup Germany, an England Face Plate and an Adidas Football, all for a bargain Ł249.99.

And while SPOnG prefers Konami's Pro Evo to FIFA, the bottom line is that FIFA is currently the best online footy game on Xbox Live, so is something of a necessity for you and your mates to really make the most out of your World Cup Summer.
Companies: Microsoft
Games: 2006 FIFA World Cup