Prepare to cry all over again 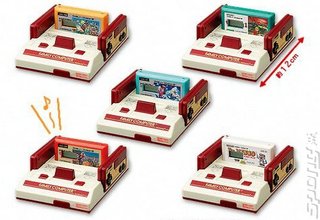 Look at those, pointed out to us by our former sworn enemies and now new friends at Kotaku. They're alarm clocks shaped like Famicom systems, made predictably by Banpresto.

Of course, if you're anything like the SPOnG writing staff, your thought process will follow this rough timeline. Wow! Famicom alarm clocks! They'll never be released outside of Japan. However, I might be able to get one from eBay. In fact, it's about time I had a real Famicom to put on show in my house! I'll check the prices every few months, then not buy one because I know they're twenty quid in Japan and everyone on eBay wants six times that.

You're still here? Well come back often for more stuff you can't buy and almost amusing rantings about being obsessed with videogames.