The Charts - Hitman Bang on Target

A golden week for Eidos. 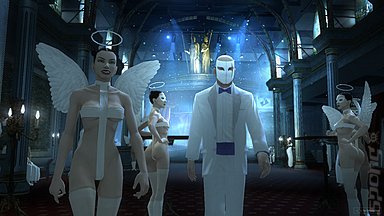 All Images (7) »
Eidos Interactive?s Hitman: Blood Money shoots straight in at number one in this week?s All Formats Top 40 as supplied by ChartTrack, finally knocking EA?s FIFA World Cup Germany 2006 from the top slot.

Hitman: Blood Money is the Britsoft publisher?s second All Formats chart-topper this year, following the success back in early spring (yes, it?s now summer!) with Tomb Raider: Legend. And that success continues, with price-slashing of Lara?s last outing pushing up sales on that title, keeping her right up in the top five at five.

Indeed, Eidos boasts an impressive four solid titles in the Top 20 this week, with Championship Manager 2006 at nine, and Urban Chaos: Riot Response heading up the chart from 18 last week, to this week's 11th spot. All in all, it?s a good week for the UK games publishing industry.

The nation is of course still firmly in the grip of football fever, and is likely to be for some time (till the end of time? ? Ed). This is reflected in the chart, with FIFA World Cup Germany and Konami?s now bargain-priced Pro Evolution Soccer 5 holding onto the number two and three places respectively.

Perhaps the best news of the week is the appearance of Rockstar Games Presents Table Tennis, which smashes straight into the top five at four this week. It?s SPOnG?s favourite game of the moment, indeed of the year so far, and it?s great to see this 360-exclusive sell so well in it?s debut week. Nice one, Rockstar.

Elsewhere, the mandatory movie cash-in of the week is Activision?s X-Men: The Official Game (has anyone even considered an ?unofficial version?? ? Ed) which hangs in the top ten at six, mainly due to the release of the movie last week. Misguided consumers still insist on buying The Da Vinci code, which moves up to number eight this week: a critically-panned game based on a critically-panned movie based on a critically-panned book. Duh! SPOnG still refuses to waste our time reading this religious whodunnit nonsense, never mind watching the movie or (ye gods!) playing the spin-off game.