Build your own virtual robot to battle to the end. 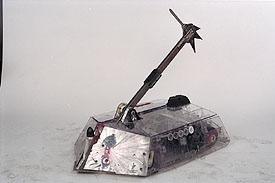 A game version of the hit television series Robot Wars is currently in the pipeline and should be with us in November. The television show attracts approximately four million viewers every week and is in its fourth series A Game Boy Color version was released last year and it sold out within three weeks due the popularity of the show.

Robot Wars is the BBC?s first venture into the world of next-generation gaming and it should be a big hit for them. This new PS2 version will allow you to build your own virtual robot and take it into battle. Combine this winning formula with the advanced graphical capabilities of the PS2 will make Robots Wars a game to look out for.

In the PlayStation 2 game you will be able to upload and download various robot designs to play with. If you build an amazing robot you will able to share that design with other gamers all over the country.

Dave Lee, Director of BBC Multimedia comments: "BBC Multimedia has made a success of transforming great television brands into great interactive properties. Whilst our early success came from PC CD-ROMs, a range of PlayStation titles are now available, with a fourth title available from early April this year. In addition we now have three Game Boy Color titles on release. It makes good sense to extend our publishing interests to those formats that are appropriate for particular brands. Robot Wars enjoys a huge TV following and will be a good fit with the PlayStation 2 market, making this a very logical and obvious step for BBC Multimedia."