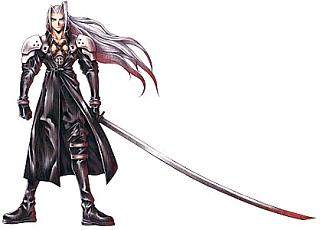 Sephiroth
All Images (2) »
It is looking highly likely that Square Enix will be remaking the epic and very much beloved Final Fantasy VII for PlayStation 3, as various media outlets stuff fist-fulls of twos together into one big gleaming mush of four.

Building on the murmurings of last year when SE showed a 'next-gen' demo called FFVIIPS3, two US magazines, Game Informer and EGM, are now claiming FFVII for PS3 is now a cert. This adds to speculation in the wake of Square's impressive press conference that the game had been confirmed, off the record, by SE staffers though it wouldn't be appearing on the showfloor.

In related news, it is also expected that Final Fantasy XII will see some sort of PlayStation 3 spin-off, perhaps as an aperitif for the full next-gen outing the RPG masters have planned, the incredible-looking Final Fantasy XIII. Again, these rumours remain unconfirmed, though the possible realisation of the concept of milking the twelfth game in the series has been the gossip fodder of Japanese games journalists in recent weeks.

We contacted Square Enix US today for clarification, though the firm did not respond at time of press. We'll update you as soon as we learn more.

crs117 24 May 2006 16:25
1/1
I can honestly say that SquareEnix is going to bankrupt themselves developing games for the next gen consoles. If they spend as much time and money on content as they have to max out previous consoles, the FF series is going to be astronomical in costs even when compared to its success of sales.

To be honest the last several FF games in my opinion have completely sucked (not to mention the new KH2) where it seems more about presentation than actual legitimate game play. Sure i love nice graphics, and fancy fighting animations, and even the occasional story clip (pre-rendered or in game), but progressing the story in their last several games has been almost all style and no substance. I feel like i am watching much more than playing, and while yes it looks great, i cant get a gaming rythm going which is essential for any video game that I play.