Oh, and a cracking week for Animal Crossing 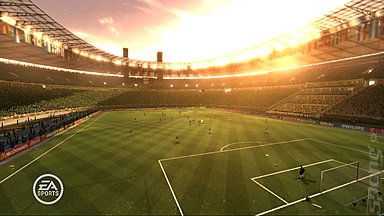 The UK entertainment software market bounces back this week, following on from the lowest sales week in over two years, boosted by launches of leading film tie-ins and continuing healthy sales of a number of football titles as World Cup fever takes hold of the nation.

EA’s FIFA World Cup Germany 2006 tops the All Formats chart for the fourth consecutive week, boosted by the PSP version's release last Friday, which also shoots straight to the top of the PSP chart this week. Konami’s critically-lauded Pro Evolution Soccer 5 dribbles up the chart from four to two, due to its hugely successful budget re-release.

Eidos Interactive’s Tomb Raider Legend, suffering a little from the World Cup wife syndrome, drops down one place to three this week, though the company has still had a pretty successful sales week, with Championship Manager 2006 hanging on in at five.

A successful week also for Nintendo last week, as following close behind Lara is Animal Crossing: Wild World, which jumps up three places from seven to four, following the successful television advertising campaign.

Elsewhere in the world of the DS, hardcore gamer favourite Metroid Prime: Hunters drops from 11 to 26, whilst Pokemon Link falls six places from 18 to 24. It would seem that the focus on casual gamers is paying dividends for Nintendo. SPOnG hopes however that they don’t give up on the hardcore altogether.

It’s also a good week for movie tie-ins, with Activision’s X-Men: The Official Game straight in at six. The game is bound to shoot up the chart next week, as the movie releases in the UK this coming Friday. We will be amongst the unwashed masses, stuffing ourselves with overpriced popcorn at our local multiplex this Friday.

Take 2’s The Da Vinci Code debuts this week, straight in at 12, boosted of course by the interest in the critically-panned movie, based on a badly written book which everybody still seems to have agreed to read on the London Underground.