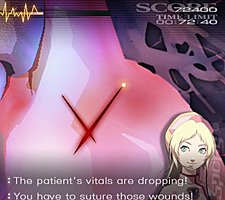 Its good news for Nintendo again today, with not one but two interesting Wii titles confirmed - a new Bust-A-Move game from Majesco and Trauma Center: Second Opinion from Atlus.

Few details have been released on the Bust-A-Move title, but it?s not too much of a stretch of the imagination to think of ways in which the Wii controller might be used in the bubble-popping puzzler.

Atlus? Trauma Center: Second Opinion is the follow up to its DS operation-sim in which you control Dr. Stiles - patching wounds, removing glass and other nasty bits and bobs from patients, stopping tumours from spreading, and so on.

Again, it will be interesting to see how the game makes use of the Wii?s innovative controller. One detail that has leaked out so far is that the game will come bundled with ?All-new defibrillator pads?.

Whatever next!?
Companies: Atlus Majesco Nintendo
Games: Trauma Center: Under the Knife