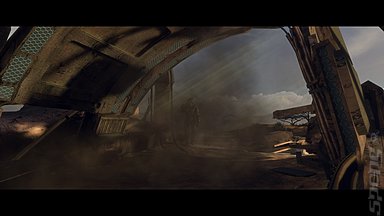 All Images (5) »
Last week, SPOnG finally got to see the new Halo 3 trailer at Microsoft?s pre-E3 conference, and despite its shortness we were summarily blown away. One wouldn?t have expected anything less, really.

Now that the announcement has been made, Bungie is kindly showering fans with new info on the most anticipated Xbox 360 game yet. But before you read on, if you have yet to see the trailer then you might want to download it right here;

As Bungie notes on its website, ?It's been a chore biting our tongues on this one. Call it a combination of studio secrecy, corporate secrecy, Bill Gates already announcing it four times and, you know, whatever.?

The trailer is put together from models, art, storyline and locations from parts of the actual game - so everything in the trailer is being rendered in real-time on the Xbox 360. The HDR lighting, self-shadowing, GPU-run particle system and many other effects should, Bungie promise, make it into the final game.

Bungie continues: ?In fact, it's the stuff it doesn't contain that gives it a strange kind of context. You can see how detailed the Chief is, but that detail applies to our other, unseen, unrevealed characters, vehicles, environment and so on. There's no AI visible in the demo, no multiplayer, and the entire thing has been left deliberately subdued both to give scale to the artifact and because this is our announcement. The real stuff will come later.?

CJ Cowan, Bungie's director of cinematics has the following to say on one of the most startling moments in the trailer - the return of Cortana: "Given the variety of character and story arcs at the end of Halo 2, we wanted to boil down our announcement to a few key threads. Cortana and the Chief being a galaxy apart is a situation we haven't seen before, and is something that is a powerful component to Halo 3. We are using her transmissions in the demo to give the viewer a few subtle clues to her situation and state of mind, without revealing any specifics we want to save for the game itself."

The meat of the demo, and the scene which generated max 'whoop' volume at E3, CJ goes on to explain, "...is the Chief, back on a devastated and Covenant controlled Earth, standing over the excavation of a structure buried in the crust of our own planet."

"The questions raised by these images, and the feeling that our assumptions about the Halo universe are being challenged this late in the story is what I am personally most excited about leaving with our fans. That's the type of thing that builds anticipation even more for the payoff to this trilogy we are preparing."

Bungie?s art director Marcus Lehto explains that, "It was intended to be an understated announce of Halo 3 - the tone is that of mystery and suspense ? the calm before the storm. I wanted to make sure that we re-introduced the Chief, show that Earth is thoroughly conquered, with Covenant everywhere, and that there is a glorious, ancient artifact buried under the Earth?s crust which will provide H3 with the epic journey which we all want."

Music-wise, composer Marty O'Donnell hired a 60-piece orchestra and a 24 piece choir to record the trailer music, saying: "I want the viewer to have a feeling of anticipation and wonder for the first fifty seconds or so, up until Master Chief is revealed and they realize that it?s Cortana trying to tell them something."

Bungie has also just released a load of new info on Halo 3, specifically focusing on the E3 trailer ? in the form of a democratic questions and answers session on its website.

Spill your thoughts, ruminations, ponderings and cogitations on Halo in the forums right below. Oh, and Halo 3 is due at an unspecified time in 2007.
Companies: Bungie
Games: Halo 3