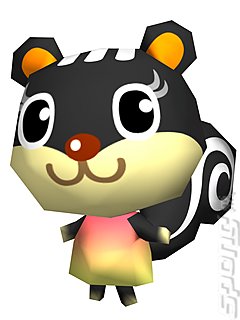 All Images (3) »
IGN is reporting that, according to Japan's Hochi Shimbun online edition, Nintendo has to date shipped over three million copies of "Animal Crossing: Wild World" in Japan.

Oideyo: Doubutsu no Mori, as the game is known in its homeland, has been so popular that Nintendo has decided to make an Animal Crossing animated Manga movie. If you are a fan of the game, this news has surely just brought a small smile of satisfaction to your face.

Japanese director Jouji Shimura, known for his work on Master Keaton and Shin Angyo Onshi is in place to direct the animated movie, set to be released in Japan this December.

The game's development staff are cooperating with Shimura-san on the project, which promises to retain the cutesy, collect-o-mental themes that have helped the game appeal to the millions of hooked gamers worldwide.

If you are not sure why the game has sold so many copies, SPOnG urges you to do one thing; buy it and see. It's only a mere Ł25 or so, and if you really don't like it (you will like it, we assure you) then you can take it back and trade it in for the tons of other superb DS games currently on the shelves. Easy.