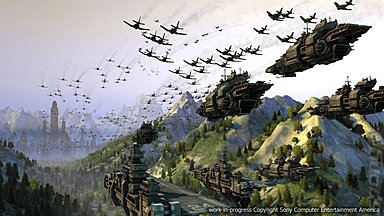 All Images (15) »
No matter how Sony and its loyalists try to spin it, if Nintendo hadn't already proven that people were (extremely) willing and interested in trying out motion-controlled gaming, Warhawk would still be controlled via more traditional means.

Case in point: the team working on Warhark were reportedly given only around ten days notice to actually implement the new gyroscopic controller functions into their baby. While many will of course fault Sony for its obvious lack of originality in this aspect, it?s clear that this won't stop the company from continuing to outsell all the competition, providing its games are solid.

And therein lies the question(s). Is Warhawk any good? Does it work? Is the motion-control a gimmick? How well did the developer actually manage to implement these brand new controls into a game that was already well underway? The answer is, and we are actually slightly sorry to break this to the Nintendo faithful, it's actually really good. It works.

We were fully expecting it to be awkward, unmanageable and unresponsive. What we found, however, was that the exact opposite was true. We were almost instantly able to make tight banks in narrow valleys, skim just along the surface of the terrain and even fly with ease through a tunnel and come barrel-rolling out the other side completely unscathed. We did of course occasionally over-estimate our own aptitude and smack into a wall or two, but overall the experience was very enjoyable.

The one downside to this particular implementation however is that, unlike Nintendo's one-handed method, holding a controller with two hands causes slightly more involuntary pull, purely due to the natural way your body is set up. We're sure with more practice this will iron itself out, but we often found that, when just trying to bank to one side or the other, we would often pull up a bit as well because we naturally bent/leaned the controller inward when tipping it. Go ahead and grab any game controller you've got laying around and try and lean it just left or just right whilst keeping it level and you'll see what we mean.

Gameplay-wise, the game, as it stood last week at least, was not offering much of a challenge beyond being a bit of a playground in which we could experience the controls and graphics in a relatively non-stressful environment. There were plenty of enemy craft - ranging from tiny fighter to large battleship types - to shoot at and practice our lock-ons with, but none of them were making a concerted effort to take us out.

Another strange aspect of the tilt-only control method is that it leaves your left thumb awkwardly bored. While your right hand has plenty to occupy it - from lock-ons to accelerating, switching between flight and hover modes - your left hand is left rather redundant, simply managing the rarely used (by us at least) brakes. Our natural inclination was actually to use the left stick to control the crosshairs independently from the orientation of the vehicle itself, but as this was sadly not available, we frequently found ourselves moving the stick along with the entire controller. A strange reversal from our usually fruitless controller moving in previous ?last gen? games! (Is PS2 now ?last gen? already? ? Ed).

Graphics wise, Warhawk is certainly a lovely game, but by no means the leaps and bounds above currently available 360 software that Sony would have us believe. While the eventual transition from ship to ground combat may make things more striking in future iterations, what was on display was nice, but not altogether stunning. Water effects were pleasant and natural. The vehicles are all well modeled and textured and have a fair amount of moving parts and reflections to give them a nice realistic look, and the landscape itself was actually a tad on the shiny side.

The real stand out effect was actually the volumetric clouds that had been shown off at this year's GDC. They do indeed look as good as they did in the video and were quite a nice effect. They didn't, however, do much of anything for gameplay, but we suppose a multiplayer component could make excellent use of this sort of thing, especially with the previously mentioned hovering abilities. Of course now we can all thank Sony for inventing a way for people to camp in a flight game, but we suppose it's a legitimate strategy.

All-in-all, we were pleased, but not overwhelmed by our (admittedly all-too-short) time with Sony's one and only motion controlled outing to date. We're sure that, as it is, it would make an excellent shooter on its own and the eventual addition of multiple modes of play will really help to flesh it out, giving it a worthwhile place in a fairly standard looking launch line up. Of course having a well rounded and solid launch line-up is a tricky thing to pull off for anyone, so we imagine this could easily be a top seller when the system finally sees the light of day this coming Fall. Stay tuned to SPOnG for more details as they come available and let us know what you think about Sony?s attempts to integrate motion-control into PS3 in the forums below.

Bentley 15 May 2006 17:26
1/4
Motion control is so 1995. It's no replacement for feeling the tarmac through your controller, or feeling a helicopter fly over in Metal Gear Solid.

I've been an avid fan of PlayStation since the early days of PS1, and have always had my eye on PS3. However, I get the feeling Sony are losing the plot, getting a bit too big for their boots and I find them trying to tell us gamers what we want, rather than listening to us, most insulting.

"Rumble is last-gen, motion is next-gen" said "Big" Phil, showing both an obvious lack of knowledge of gaming history, and a growing gulf between himself and the pulse of the gamers.

I now find myself for the first time eyeing up the 360, and after the fantastic demos at E3, to my shock I am now desperate for a Wii.

I just hope Sony are joking when they say they will drop the vibrations. Surely they are joking? They were the ones that made it so essential in gaming lore. It must be a mistake.

And I am really sorry about the obvious Wii crack.

i find it interesting that the above stated criticism was always launched at Nintendo and now... we don't hear anything of the sort.
Hell... everyone seems to see something good in the Wii... MS and Sony are both saying it will be the second console next to theirs (let's do some math, if everyone that buys a X360 or a PS3 also buys a Wii... who's the market leader?) it's getting...freaky. is everyone preparing themselves for a huge Wiinvasion or something?

CarnageCatalyst 16 May 2006 03:03
3/4
Sorry to say but the rumble is GONE. Sony have stated that the rumbling messes around with the motion senses. That's also apparently why the controller is lighter than before - the rumble component was quite heavy.

ohms 16 May 2006 11:18
4/4
well, seeing as sony bow to public opinion so easily (boomerang controller anyone?), Im sure an official rumble enabled controller will turn up after not too long, within a year of PS3 launch I reckon.