Rockstar Games unveils their first next generation title to be available for Xbox 360 video game and entertainment system from Microsoft this May. 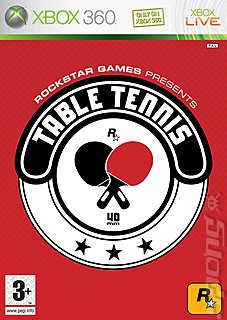 New York, NY - March 6, 2006 - Rockstar Games, the world-renowned publishing label of Take-Two Interactive Software, Inc. (NASDAQ: TTWO), is pleased to announce Table Tennis for Xbox 360TM video game and entertainment system from Microsoft. Developed by Rockstar San Diego, the creative house behind the highly successful Midnight Club racing series, Table Tennis is expected to ship to North American retailers on May 22nd, 2006 for a MSRP of $39.99 and will hit European retail shelves on May 26th, 2006 for a price of ?39.99 and Ł29.99 in the UK.

"Our goal was to create a game that is perfectly addictive in its focused simplicity, a game that showcases the true possibilities of a next gen experience, not just in looks but in feel and pace," stated Sam Houser, Founder and Executive Producer of Rockstar Games. "We wanted to use the power of the new hardware and the resolution of new televisions to give the game an immediacy, an intensity and a sense of physicality and reality, resulting in a purer, more visceral experience that simply was not possible previously." Houser continued, "It is a distillation of game design philosophy, focusing on removing the traditional areas of compromise inherent in managing size and scope and concentrating the hardware's entire power on one activity, with the aim of doing that better than it's ever been done before."
Companies: Rockstar Rockstar San Diego
People: Sam Houser
Games: Rockstar Presents Table Tennis