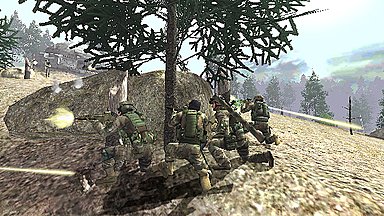 All Images (5) »
London, UNITED KINGDOM ? May 25, 2005 ? Today Ubisoft, one of the world?s largest videogame publishers, announces that it will release Tom Clancy?s Ghost Recon® 2 Summit Strike exclusively for Microsoft?s Xbox® video game system in August 2005. Blending the best features from the previous instalment with the talents of Ubisoft?s award-winning studio, Red Storm Entertainment, Tom Clancy?s Ghost Recon® 2 Summit Strike will expand the gameplay of Tom Clancy?s Ghost Recon® 2 to offer players more maps, missions, and weapons. With a SRP of Ł19.99, this will bring an exciting new eleven mission single player campaign and expanded multiplayer content to gamers who want more game play from one of the most popular franchises on Xbox LIVE. This will keep fans happy as they wait for Tom Clancy?s Ghost® Recon 3 ? due out this holiday on current gen and next gen platforms.

The Kazakh President has been assassinated by a Pakistani warlord attempting to take control of the country. Follow the Ghosts as they work in concert with U.N. forces to track him and his military across Kazakhstan. The Ghosts are the only chance to thwart his attacks against high profile targets and to prevent national devastation.

Microsoft, Xbox, Xbox Live, and the Xbox and Xbox Live logos are either registered trademarks or trademarks of Microsoft Corporation in the United States and/or other countries and are used under license from Microsoft.

With over 80 million books sold, Tom Clancy is arguably the world?s most recognized author. His works include fiction such as The Hunt for Red October, Clear and Present Danger, The Sum of All Fears, Rainbow Six, Red Rabbit, and the recently released The Teeth of the Tiger. Clancy also writes nonfiction works about weapons and various military units. Four of his books have already been adapted into highly successful feature films.

Ubisoft is a leading producer, publisher and distributor of interactive entertainment products worldwide. It is the fastest growing company in the videogame industry and has grown considerably through its strong and diversified line-up of products and partnerships. Ubisoft has offices in 21 countries and sales in more than 50 countries around the globe. It is committed to delivering high-quality, cutting-edge videogame titles to consumers. Ubisoft generated revenue of ? 537 million for the 2004?2005 fiscal year, an increase of 8% over the previous fiscal year at constant exchange rates. To learn more, please visit www.ubisoftgroup.com.
Companies: Ubisoft
Games: Tom Clancy's Ghost Recon 2: Summit Strike