SEGA?s Popular Sports Franchise Gears Up for a Handheld Tour in Summer 2005

SEGA of America, Inc. and SEGA Europe Ltd. today served up an ace by announcing that they will publish Virtua Tennis World Tour for the PSP. 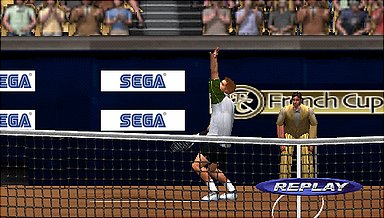 Virtua Tennis World Tour will feature a playable array of internationally renowned tennis pros in addition to a make-your-own player mode, exclusive mini-games, and original courts. Wi-Fi gameplay is supported, encouraging up to four friends to play together.

?Virtua Tennis on PSP successfully combines the legendary gameplay of the Virtua Tennis range with great new features designed for the gamer on the go,? commented Matt Woodley, Creative Director of SEGA. ?Add to that a roster of licensed players and the game looking gorgeous on the PSP?s amazing screen and you?ve got what I believe is a must-have title.?

Virtua Tennis World Tour features three core gameplay modes: World Tour, in which players travel the globe using a custom-created character to win cash; Exhibition, where players can take control of a pro tennis all-star for one-off matches; and Tournament, which puts players in knockout sessions where only the best will see victory.

Fun to play for minutes or hours and always challenging, it?s easy to see why Virtua Tennis World Tour is perfectly suited for the PSP system.