Head above the parapet this summer. 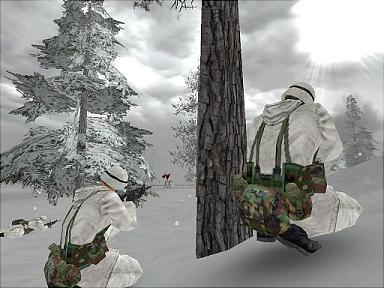 Today Ubisoft, one of the world's largest video game publishers, announced that America?s Army: Rise of a Soldier will be available in summer 2005 for the PlayStation 2 computer entertainment system and the Xbox video game system from Microsoft. Ubisoft and the U.S. Army are working together to develop a new and unique experience for console gamers that features all the action-packed realism that players have come to expect from the America?s Army game brand. With unprecedented behind-the-scenes access to the military experience of the U.S. Army, Ubisoft is creating the most cutting-edge military console game ever, which will offer a real contemporary experience through true-to-life character progression via an all-new Career mode and gameplay

About America?s Army: Rise of a Soldier

Built in partnership with the U.S. Army, and developed by Secret Level, America?s Army: Rise of a Soldier offers the most true-to-life Army experience, allowing you to create a soldier and take him through the thrills and adventure of an army career. Intense single-player missions and high-adrenaline multiplayer action build the skills of your soldier and advance him through his career.