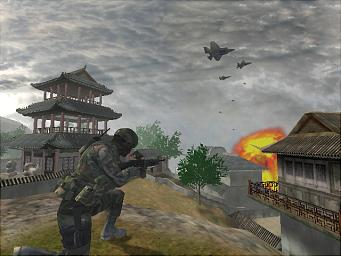 Generic Image
Ubisoft, one of the world?s largest videogame publishers, today announced that it will release two different versions of Tom Clancy?s Ghost Recon 2 for Holiday 2004 one for the Xbox video game system from Microsoft and one for the PlayStation 2 computer entertainment system. The PC version is now scheduled to launch in early 2005 in order to once again deliver ground-breaking innovation to the PC audience; more exciting details will follow. One of the most successful game franchises to date, Tom Clancy?s Ghost Recon titles have sold more than 4.5 million copies worldwide, and the first Ghost Recon remains one of the most successful Xbox Live games of all time.

?Ghost Recon benefits from some of the most committed fans in the industry. We?re grateful for that and we?re showing them some love by developing two different games for Xbox and PlayStation 2 this holiday season,? said Florence Alibert, marketing director for Ubisoft EMEA. ?Whatever the platform, Ghost Recon 2 will immerse gamer in the chaos of modern war, whether in single player or in multiplayer. Where the original Ghost Recon?s featured award-winning multiplayer levels, its sequel will be second to none.?
Companies: Ubisoft Ubisoft Shanghai
People: Florence Alibert
Games: Tom Clancy's Ghost Recon 2