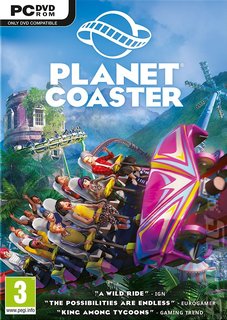 Fireworks are an explosive new way to customize parks in Planet Coaster?s Summer Update. Celebrate the Fourth of July, New Year, Bonfire Night or any other occasion with the most detailed fireworks simulation ever created for a videogame. Design epic firework displays with the new Display Sequencer, trigger them alongside other park events, and even choreograph them to custom music! Create the ultimate sky-high summer spectacle, or download the most explosive displays from the Planet Coaster community.

New Video and Image Scenery unlocks the ultimate in creative customization for Planet Coaster players. Fully customizable wall panels and screens let players place their own images and video into Planet Coaster and create parks unlike any other.

And give a boost to every ride with the new Flatride Sequencer and Painted Wooden Coasters. Take total control over your favorite rides, and give your wooden coasters a whole new look with a lick of paint.

There?s more to Create, more to Manage and more to Share in the Planet Coaster Summer Update.

New Rides
Iron Claw. Feel the G-force with this classic pendulum ride, popular in parks around the world.
Blackout. This swinging ship ride is a coaster park classic, flipping park guests upside down with an inverting loop.
Sky Watcher. A stunning ultramodern observation platform forged from glass and steel with a rotating cabin offering panoramic views. A perfect centerpiece for any modern park.

New Rollercoasters
Gnarler. An all-modern train running on wooden supports will let your guests ride rough wooden tracks in comfort and style.
Viper One. Two 66 meter supports elevate and inline roll at each end for a truly terrifying multi-launch coaster.
Power Up. This compact coaster with a vertical inverting chainlift is designed for small-scale parks where land is tight, making for a short but exhilarating ride.
De-Gen. A 21st century train on a traditional looping track brings a coaster classic up to date.
Bolt. An old-school coaster train makes for a rugged ride on a modern boomerang track.

About Planet Coaster
Create. Manage. Share. Be inspired and inspire others as you create, manage and share the world?s greatest coaster parks with friends and content creators around the world. Surprise, delight and thrill your guests as you build your coaster park empire, and let your imagination run wild with the future of coaster park simulation games.

Planet Coaster is available now for PC. Elite Dangerous is available now for PC and Xbox One, and is coming to PlayStation 4 on June 27, 2017. Other Frontier titles include RollerCoaster Tycoon 3, Thrillville, LostWinds, Kinectimals, Kinect Disneyland Adventures, Zoo Tycoon, Tales from Deep Space and ScreamRide.