32 Professional Teams From Around the Globe Compete for $1 Million Playing Call of Duty: Advanced Warfare 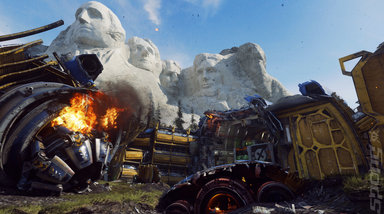 All Images (5) »
London, UK ? 27th March, 2015 ? It?s time to determine who?s the best Call of Duty® team in the world with the start of the third annual Call of Duty® Championship, presented by Xbox, the biggest eSports first person action tournament of the year. Beginning today through Sunday, in Los Angeles, Activision Publishing, Inc., a wholly owned subsidiary of Activision Blizzard (Nasdaq: ATVI) and development studio Sledgehammer Games, in partnership with Xbox, welcome 32 of the most accomplished Call of Duty®: Advanced Warfare multiplayer professional teams from around the world to compete head-to-head on Xbox One, the all-in one games and entertainment system from Microsoft, for the honour of being named the ?Call of Duty World Champions? and their share of the tournament?s $1 million total prize purse.

Fans can tune-in to every thrilling, adrenaline-pumping moment through livestreamed coverage on Xbox Live, CallofDuty.com and at MLG.tv, as well as select editorial partners worldwide. Culminating on Sunday, 29th March, the tournament?s final match livestream starts at 9:00 p.m. (GMT) on the Xbox Live Dashboard (in participating regions).

Fans tuning into the Call of Duty Championship, presented by Xbox livestream on Sunday will also see the world premiere of live gameplay from the upcoming Call of Duty: Advanced Warfare Ascendance DLC pack and a new trailer for Infected, the next episode of Exo Zombies. Ascendance is the definitive DLC package, with its four new, thrilling multiplayer maps, the formidable OHM directed energy light machine gun/shotgun hybrid, the OHM Werewolf custom variant, the all-new Exo Grapple ability playlist that introduces the Exo Grapple ability to multiplayer and Infected, the latest instalment of Exo Zombies. Ascendance will be available first on Xbox Live on 31st March.

?We have an amazing Call of Duty community. From those who like to just have fun playing with their friends, to those who like to compete at the highest level at the Call of Duty Championship. It?s a testament to our development teams that they can create an experience, which is so fun for everyone to play and watch,? said Rob Kostich, senior vice president, Call of Duty, Activision Publishing, Inc. ?Call of Duty: Advanced Warfare takes centre stage this weekend, as the top players from around the globe showcase their incredible skill. The best four-player teams are here to compete head-to-head in intense objective-based game modes all weekend long and we can?t wait to see all the action and see who takes it all.?

These 32 teams from 5 continents and 11 countries around the world have trained extensively over the past several months playing Call of Duty: Advanced Warfare, winning their respective regional competitions in qualifying events conducted by the professional competitive gaming organisations of Major League Gaming (MLG), Gfinity and the Australian Cyber League (ACL). Teams like Exile5.T1 Dotters from Australia, European Champions, Epsilon eSports from the UK and SSOF Gaming from Brazil, will compete against such notable teams from North America as Optic Gaming, Team EnVy and Team Kaliber.

The Call of Duty Championship, presented by Xbox, begins with round-robin style pool play among eight groups of four teams. The top two teams from each group will advance to a 16-team double elimination bracket, where the team that places first will take home $400,000 of the tournament?s $1 million dollar total prize pool. The remaining seven teams will each take home prizes ranging from $200,000 for second place to $25,000 for eighth place. Further details on the 2015 Call of Duty Championship, presented by Xbox, including full rules and regulations, Call of Duty: Advanced Warfare maps and modes for the tournament, livestream information, prizing distribution and more are available at https://CallofDuty.com/esports.

In addition to the hotly-anticipated tournament competition, professional NFL players Golden Tate and Demaryius Thomas will each lead a team made up of a professional eSports player, an internet personality and a fan picked right from the audience, in an exhibition grudge match for the Call of Duty? Endowment. The teams will go head-to-head playing new maps from the upcoming Ascendance DLC pack. The winning team will have a $100,000 donation made in their name to the Endowment and its continued effort in helping veterans return to the workforce.