City Interactive has today unveiled the contents of its premium versions of Sniper: Ghost Warrior 2. 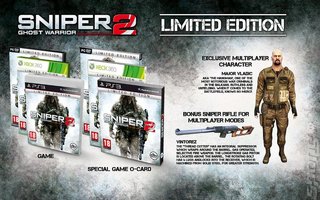 All Images (2) »
[b]The highly-anticipated sequel ? set to be released on Xbox 360, PlayStation 3 and PC on August 21st 2012 ? will be available in two premium flavours, offering players the opportunity to own prestige editions of the best sniping game to date.

The stunning Collector?s Edition (RRP Ł44.99) will come in a prestigiously produced folded box, housing an extraordinary arry of contents:

· A ?Sniper Tactics and History? hardback book, developed in collaboration with military experts with combat experience

· The Vintorez in-game sniper rifle ? AKA the ?Thread cutter? ? for use in multiplayer modes

· The Vintorez in-game sniper rifle ? AKA the ?Thread cutter? ? for use in multiplayer modes

Sniper: Ghost Warrior 2 takes the bulls-eye precision of its best-selling predecessor to new and exciting heights. Powered by the CryENGINE 3 engine, the missions of Sniper: Ghost Warrior 2 are graphically stunning and more challenging as you once again step into the ghillie suit of a special ops sniper to take down the enemy.