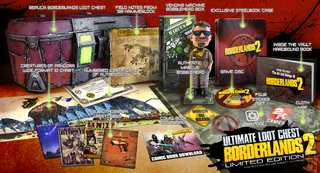 All Images (2) »
New York, NY, May 17,2012 ? 2K Games and Gearbox Software today announced two tiers of special limited editions for the highly anticipated Borderlands®2 - the Deluxe Vault Hunter?s Collector?s Edition and Ultimate Loot Chest Limited Edition. Currently in development by Gearbox Software, Borderlands 2 is the sequel to the critically acclaimed four-player cooperative shooter-looter that combined intense first-person mayhem with role-playing gameplay. Both editions will reward fans with a number of collectible and in-game bonus items that will enhance the action-packed experience of Borderlands 2.

Gamers who pre-order the Deluxe Vault Hunter?s Collector's Edition, Ultimate Loot Chest Limited Edition or the standard edition of Borderlands 2 from participating retailers will also gain access to the Borderlands 2 Premiere Club, allowing them to download the Gearbox Gun Pack, a Golden Key, the Vault Hunter?s Relic and an all-new fifth character class - the Mechromancer. The Gearbox Gun Pack is a collection of unique guns to help players begin their journey on Pandora. The Golden Key is used to unlock a rare in-game item in the mysterious Golden Sanctuary Loot Chest found in Borderlands 2. The Vault Hunter?s Relic is an in-game item that boosts players? gear-hunting fortune while playing solo or teaming up with friends. The Mechromancer character class will be available following launch when development of the character is complete and is free to those who pre-order Borderlands 2, and will be available for purchase for those who do not. To pre-order all editions of Borderlands 2, please visit www.borderlands2.com/preorder.

Borderlands 2 features all-new characters; skills; imaginative, diverse new environments with unique missions and enemies; and more exciting and fun weapons, equipment and loot than ever before. All of these features come together in a story that takes players to the world of Pandora to take down the notorious Handsome Jack and his corrupt Hyperion Corporation as a solo campaign or with up to four cooperative players.

Microsoft, Xbox, Xbox 360, Xbox LIVE, and the Xbox logos are trademarks of the Microsoft group of companies and are used under license from Microsoft.

"PlayStation" is a registered trademark of Sony Computer Entertainment Inc.