Payback?s a bitch, especially when dealing with The Joker?s most psychotic sidekick, Harley Quinn 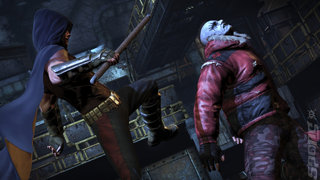 All Images (5) »
Payback?s a bitch, especially when dealing with The Joker?s most psychotic sidekick, Harley Quinn. Harley is the new boss of Arkham City and is determined to make Batman pay for what he?s done to The Joker.

Warner Bros. Interactive Entertainment and DC Entertainment bring to you today a new trailer and screenshots from Harley Quinn?s Revenge Pack, the final chapter of Batman: Arkham City saga that adds more than two hours of fresh single-player gameplay to the critically-acclaimed title from Rocksteady Studios. The Harley Quinn?s Revenge mission sends players back into Arkham City to face their final challenge as they interchange between playing as both Batman and Robin.

Batman: Arkham City builds upon the intense, atmospheric foundation of Batman: Arkham Asylum, sending players flying through the expansive Arkham City ? five times larger than the game world in Batman: Arkham Asylum ? the new maximum security ?home? for all of Gotham City?s thugs, gangsters and insane criminal masterminds. Featuring an incredible Rogues Gallery of Gotham City?s most dangerous criminals including Catwoman, The Joker, The Riddler, Two-Face, Harley Quinn, The Penguin, Mr. Freeze and many others, the game allows players to genuinely experience what it feels like to be The Dark Knight delivering justice on the streets of Gotham City.