GOA to Bring the Fantasy to life Across 56 European Territories 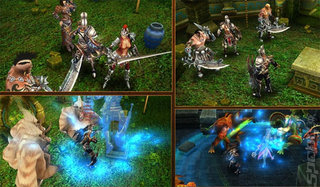 ?GOA is a giant in the online publishing space in Europe and we are thrilled to be building such a strong relationship with them,? said Jeff Lujan, Founder and Chairman of True Games Interactive. ?Warrior Epic has been getting great buzz and is highly anticipated in the US and we have no doubt that gamers across Europe will also embrace it emphatically.?

?Warrior Epic is perfectly aligned with the GOA offerings and, in particular, our plans to expand services in 2009,? said Ghislaine Le Rhun, Executive Director of GOA. ?True Games Interactive are forging a great reputation within online gaming communities, and we look forward to working closely with the team to ensure Warrior Epic?sEuropean success.?

ABOUT GOA
GOA, Orange?s Games unit, benefits from 9 years experience in the management of massively multiplayer online role-playing games with, for example, the famous Dark Age of Camelot; first MMORPG available in English, French, German, Italian and Spanish, and now Warhammer Online: Age of Reckoning. Forerunner of this activity in Europe, its teams combine expertise with a passion for games and take advantage of Orange?s technical platform to offer the best of online games to European players.

Aug|'08
GOA, The European Publisher, Signs An Exclusive Deal with True Games Interactive For Its Upcoming On Line Strategy Game From Petroglyph
Jan|'09
Goa and Mythic Entertainment Issue A “call To Arms” with The Announcement Of The First Live Expansion For Warhammer Online: Age Of Reckoning
Feb|'07
GOA.com - the free online gaming portal for Europe