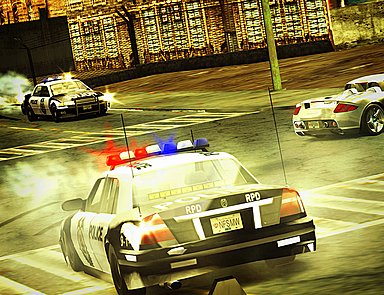 All Images (2) »
You'd be forgiven for thinking that Electronic Arts was sitting pretty for this year's Christmas number one spot in the ChartTrack/ELSPA All Formats chart, with its massively popular Need for Speed: Most Wanted. Indeed, the title has spent its first three weeks at the top of the charts with it's only real contender, Ubisoft's King Kong, wallowing at number four. However, the illegal street race-em-up was in for a battle this week as the big ape enjoyed a huge spike in sales, jointly powered by the theatrical release of the movie and that great male pastime; last minute Christmas shopping. Still, the flea-picking primate couldn't quite match Most Wanted's sales and so, once again, EA takes the top spot while Kong comes in second.

It's another great Christmas for EA, which holds a further three of the top 10 spots; FIFA 06 (#4), Harry Potter and the Goblet of Fire (#5) and Sims 2 (#10). The also-rans include are Activision's Call of Duty 2: Big Red One, which slips from two to three, Pro Evolution Soccer 5 holds its position at six, while, Narnia and Star wars: Battlefront II switch places to take up the seventh and eights spots respectively. Making an impressive last minute sprint with a sales increase of 99% in the last week is True Crime: NYC, making into the top 10 at number nine.

Unsurprisingly there were no massive fallers this week, and only one entry, Crazy Frog Racer, which dares only to show its annoying face at number 20.

So what was the top selling title on your platform of choice? You won't be surprised see that NfS: Most Wanted at the top of the PS2 charts, or GTA: Liberty City Stories for the PSP. The same is true of Pokemon Emerald on GBA and Call Of Duty 2 on PC, with Mario Kart DS ahead of the pack on Nintendo DS. However, the other formats aren't so predictable. Call of Duty 2: Big Red One Steps up a place to take the top spot on Xbox, just as Sega's Shadow the Hedgehog does on GameCube. The biggest surprise comes to Xbox 360, where Activision's Call of Duty 2, which kicks Perfect Dark Zero's pert little butt right off the top spot and down to number three, also denying Project Gotham Racing 3 a Chrimbo number one.

Of course, this is all really just a trial run. Next week's charts actually represent game sales in the last full week before Christmas. Make sure you're here to see who really wins in the last minute buying frenzy that is the Feast of Consumerism and Coveting.
Companies: Electronic Arts Ubisoft
Games: Need For Speed: Most Wanted Peter Jackson's King Kong: The Official Game of the Movie