Dragon?s Lair for the Game Boy?

When the original Dragon?s Lair came out in 1983 it shocked the gaming world. 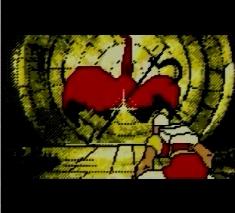 The graphics came streaming off laserdisc and featured stunning, colourful graphics. The animation was top-class, being created by ex-Disney sensation Don Bluth. The gameplay was simplistic, but engaging and required the player to react quickly to dangerous situations. If the successful moves were entered at the right time the game would continue, if not, well it wasn?t pretty. If you could go back in time and say to the people lining up their 50p?s that Dragon?s Lair would be portable in a few years time, you would have been laughed out of the arcade. Even today, Laserdisc huge, Game Boy cart tiny, does not compute.

Dragon?s Lair is coming out for the Game Boy Color and somehow it is a decent conversion of this classic game. All of the scenes from the arcade game are being re-created and the gameplay will be intact. The animation will obviously be nowhere near as good but even still it is impressive that this game will be on the Game Boy. The game will play the scenes normally and sometimes it will reverse them to confuse you. These mirror scenes help stop the game from becoming a test of memory. Dragon?s Lair will be with us in the summer.