And mysterious cloak and dagger antics from Microsoft to boot. 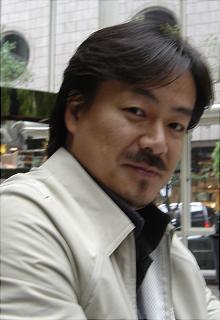 So yesterday SPOnG received word that MistWalker Studios had signed with Microsoft to make two RPGs for Xbox 2. Obviously, this is quite big news. With Microsoft securing the loinfruit of the Final Fantasy godfather, a credible Japanese push could be mounted soon after launch.

We heard that the news would be made official in an announcement at 1600 US Eastern time, that's 2100 GMT. Calling Microsoft?s Press Centre on the matter was really rather strange, however, with our conversation going something like this:

SPOnG: "Hi there. We were wondering if you could send us the press release for today?s announcement please."

Microsoft Press Centre: "Which announcement is that?"

Oh well. Makes an interesting change to the usual 'sign NDA here, wait until this point, then publish piece alongside everyone else'. Like a journalistic holiday.

So, as predicted, the news was announced. And right on time, we might add! Two Xbox 2-exclusive titles were revealed, though nothing other than the fact they will both be RPGs was announced.

?Sakaguchi-san has taken role-playing games ? traditionally a niche market ? and introduced them to a broad and diverse audience across the globe,? said Peter Moore, corporate vice president of Worldwide Marketing and Publishing at Microsoft. ?We are ecstatic to work with Sakaguchi-san and celebrate what this news means not only for Xbox, but for gamers worldwide.?

?I?m excited about the two epic game titles we will be developing,? Sakaguchi-san said. ?A number of talented creators have signed on to help develop these games, and I?m confident we will be able to create games that provide gamers with a new kind of thrill. Microsoft?s cutting-edge technologies in the next-generation platform will allow me to bring to life an array of ideas that I have had for many years,? Sakaguchi-san continued. ?I want these games to be alive with a new vision for gaming and vividly depict new characters that will transcend the game, find a place in the hearts of gamers, and make time spent with my games a fond and long-lasting memory.?

As soon as we receive concrete information, which is looking like E3 at this stage, we will of course let you know.
Companies: Microsoft Game Studios
People: Hironobu Sakaguchi

Joji 25 Feb 2005 14:41
1/6
Looks like I hit the nail right on the head. Good for MS, but will it be enough to convince japanese gamers to invest in an Xbox2? While some will say "it doesn't matter to me so long as I get Halo 3 etc" it certainly matters to MS they get it right out east, especially after losing money on Xbox machines.

Mist Walker could be very valuable to MS since false pretender rpgs like Sudeki aren't helping cutting the mustard, or wasabi rather. And while Star Wars rpgs are nice some people require something more than that. Let's hope one of these rpgs is ready for Xbox2 launch.

Coxy 25 Feb 2005 15:57
2/6
Not sure wether this will be enough to convince japanese gamers to buy an xbox 2, especially with nintendos and sonys hold on the market
more comments below our sponsor's message

enbob89 25 Feb 2005 16:42
3/6
Damn it Nintendo. You had this guy developing for DS and you should've gotten him on Revolution. Nice job passing up the opportunity.

But surely it will be better on XB2? I suppose if you're not planning on getting an XB2, but want the game then it's a dilemma...

As always with new consoles on the horizon: study the reports on which developers are on-board with which console, and pick the machine(s) which suit your needs best.

Alan is my first name 26 Feb 2005 23:54
6/6
I don't really think this qualifies as a big announcement until Mist Walker actually releases a game.
Posting of new comments is now locked for this page.