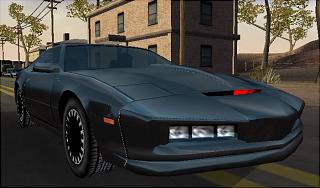 The 1980?s were rubbish, whatever anyone says. People looked ridiculous; even beautiful women managed to hide their charms behind twin-sets and shoulder pads, bad shoes and even worse hair-do?s (hair-don?ts?). Men did their bit too, rolling up the sleeves of their pastel-coloured suit jackets, sporting mullets and all that?oh, recall - with a shudder - the year of lemon yellow?

Television was just as bad. Until around the middle of the decade that taste forgot, the three (soon to be four) channels would finish broadcasting at roughly 12.30, after spewing out the likes of the execrable Hi-de-Hi and ?Allo ?Allo. Aside from the odd crime-themed American show, the 80?s was great reason to buy a video recorder.

Following on from the success of Starsky and Hutch last year, it seems that signing these old ?buddy cop? shows for videogames is the new industry black, lending as they do an easy adaptation to the massively popular mission-based driving genre.

So, to the point ? Miami Vice, the mullet-tastic Don Johnson-powered smash hit series, has been signed by Davilex for a release this year, to be made available to owners of PlayStation 2, Xbox and PC. Your mum is going to be happy, at the very least.

?We are really excited to be working on Miami Vice and with Davilex" says APE Development Director, Jason Falcus in one of the most tedious corporate quotes perhaps of all time. "Davilex have acquired a fantastic license, and share our vision of creating a top quality game, which does it justice. We are very pleased to be working with them on what we hope will be a long term development partnership.?

In other news, Davilex has announced another such game, Knight Rider 2. In what seems to be shaping up as an arcade-inspired gaming experience, with the race, puzzle, chase and explore modes of the original being complimented with what have been described to us as Mario Kart-inspired battle modes.

Not to be outdone, Davilex has come up with its own, impressively bland corporate statement:

?We are excited to develop and publish the sequel to Knight Rider," said Roger Avis, CEO of Davilex Games. "The first version was successful and it is a logical move to release its follow-up. We have carefully listened to our customers' feedback on Knight Rider and we will be incorporating many of the given suggestions into Knight Rider 2."