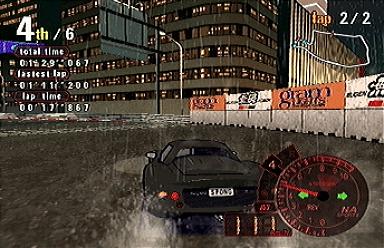 All Images (5) »
Capcom used to be really easy to understand. It would release endless Street Fighter and Resident Evil rehashes to an eager public.

Yet today, the firm has announced two publishing deals, one with Sega and one with Microsoft, further fuelling speculation that the main priority for Capcom is to move closer to Nintendo. Allow us to explain.

Over in the US, Capcom has given Auto Modellista to Sega for publishing, following the announcement that the game will take advantage of Sega?s brilliant SNAP (Sega Network Application Package) for online play.

What?s more, today Microsoft announced that it will be publishing Steel Battalion, the ambitious Xbox mech fighter that requires a colossal bespoke controller. Until very recently, both these titles featured on Capcom?s own release schedule.

Then there are the missing titles from the company. Capcom Fighting All Stars is still to see a platform announcement, existing in limbo between arcade cabinet and home console obscurity. And what of Circus Drive, the realistic racer from Capcom featuring licensed cars?

It does seem that Capcom is offloading or forgetting about all of its non-GameCube games. Having already announced five new titles for Nintendo?s machine, speculation has it that there are three or four still to be revealed.