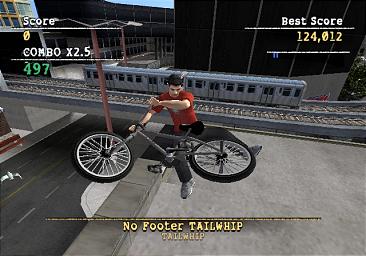 All Images (16) »
We have the full details on the soundtrack to the soon-come Mat Hoffman?s Pro BMX 2, the sequel to Activision?s popular pedal-fest from 2000-2001, depending on your choice of platform. ?Catholic? is the word that springs to mind when asked to describe the music selection for Pro BMX 2. Well, as catholic as can be expected from a game featuring grown men with tattoos, ?rad? hair and roomy shorts. Never mind the pierced head, let?s rock!

There?s something for almost everyone there: punk old and new, old school rap, contemporary hip hop-influenced pop and electronica ? how many pigeonholes do you want? The Xbox version of Pro BMX 2 features not only an extra level to play, but also the facility to rip your own choice of music to pedal along to. If you?ve ever wondered if the likes of Enya or Sting could soundtrack an extreme sports title, now?s your chance to find out.

Mat Hoffman?s Pro BMX 2, published by Activision, is due on August 30 for Microsoft Xbox, Game Boy Advance and PlayStation 2, and the estimated time of arrival for the GameCube incarnation is late September. The accompanying screenshots are from the PS2 version.