You have the packshot for Sony?s upcoming meisterwerk? Getaway!

Or, definitively, The Getaway. New screenshots too. 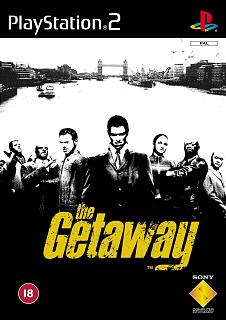 All Images (13) »
We are proud to be able to show you exactly what you should be looking for later this year on the PS2 shelves. The Getaway, from Sony?s own Team Soho, is due to appear towards the end of the year. The smart money is on an October release. The Getaway has long been touted as the mission-based driving/combat game to end all mission-based driving/combat games. Can it really topple the likes of GTA3? Imagine how good a game it would have to be to do that.

Set among the tough streets of London's underworld, The Getaway features breakneck driving action in dozens of different cars, mixed with combat on the hoof, and unprecedented levels of cinematic realism, as you battle to attempt to bring down London's biggest crime lord.

The Getaway revolves around three violent men, locked in a struggle for power, justice, and revenge. Mark Hammond, an ex-gangster on the run and desperate to avoid capture so that he can clear his name, stands wrongly accused of the murder of his wife. Frank Carter, a ruthless vigilante copper, currently suspended from the Flying Squad, is prepared to go to any lengths - lawful or otherwise - to get justice.

Both men, desperate to clear their names, find themselves manipulated and controlled by the third, Charlie Jolson, a notorious crime boss and master of London's East End underground for over thirty years. Operating on either side of the law, Hammond and Carter are both desperate for revenge and, for different reasons, both out to bring down London's king of crime.

Each plot works separately, but is intertwined with the other and equally gripping. Over an hour's worth of movie-quality cut-scenes push the narrative along, delivered in an engrossing cinematic style that will draw you further into a dark and disturbing underworld of unscrupulous criminals and serpentine plots.

You won't just be sitting watching a movie, though. The game combines adrenaline-fuelled driving with realistic on-foot combat. If you need a break from the relentless pace of the main game, bonus games allow you to travel the city as an innocent tourist, or a slightly less innocent black cab or mini cab driver.

Every car you see in the game can be appropriated and driven, and each one handles authentically: it's just that many of them won't be used to being driven the way you're going to drive them. Just be warned that all the cars can also get wrecked.

Realistic, dark and gritty, it features possibly the largest environment ever seen in an action game: more than 40 square kilometres of London streets to find your way around, as well as 20 real-life interior locations in which the action takes place. A cast of 22 main characters, as well as a host of minor ones, ensure you're never far from a potentially unsettling encounter.

With its huge scope and over 60 minutes of compelling narrative set within photo-realistic locations, The Getaway is set to be the most realistic driving/action game yet on any next generation console, but also promises to be the game that breaks through the boundaries of action entertainment.

Sony?s presence at this year?s European Computer Trade Show (ECTS) in August should enable us to get our hands on The Getaway in some form or other: we?ll do our best to get there early, in order to bring you our first impressions. We have a feeling that, after so long in the making, The Getaway is going to live up to the hyperbole.