Professor is seeking to preserve 28,000 Japanese video games before it's too late 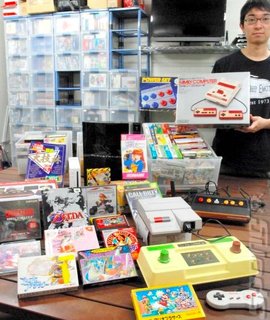 Koichi Hosoi is a professor of business administration in Ritsumeikan University in Kyoto and he takes his countries amazing video game cultural history very seriously indeed.

"I want to preserve them as an important part of culture so that even people 100 years from now can research them," he says with some fear that this cultural history might not last for the next 10 years.

The Ashai Shimbun paper reports that the Prof stating that, "In order to research young people?s culture in the world from the late 20th century to the 21st century, it is vital to study video games."

He began a project called the Video Game Archive Project in cooperation with organizations, including the Kyoto prefectural government in 1998 because but now is he worried about the lifespan of the tech. "If the current situation continues, the video game culture of the past will vanish", he believes because "consoles and software would not function in 10 years' time due to deterioration and other technical problems."

Hosoi is seeking to collect all of the estimated 28,000 video games for home and business use, which were put on sale in Japan, states the report.

Find out more about the fascinating and important project here.