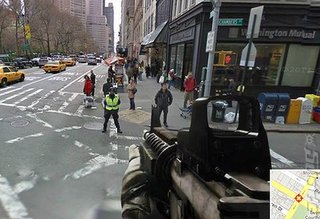 A Dutch ad agency called Pool Worldwide recently did what ad agencies the world over are trying to do: attract gamers by posting something, "Edgy". In this case an online "FPS" but this one used Google Maps and real locations. Edddddggggeeeee!

Too edgy for Google apparently.

According to the Sydney Morning Herald, "Up until recently Google Shoot View allowed users to "shoot" their surroundings. It had an M4A1 carbine superimposed on Google Street View images with gun sound effects, allowing users to go to nearby places and begin shooting at whatever they wanted with no blood or guts involved. That's all it did: make gunshot sounds and show a gun on Google Maps."

The Dutch company - which also hawks for Greenpeace among others saw its game pulled. It stated on its now defunct webpage for the game:

"Google has apperantly [sic] killed the link to their API," it said on its site. "Sorry for the inconvenience. We will be back!"

If you follow the link... it doesn't look as if it will be back.