Sacked Duke Nukem Forever PR "Shouldn?t the Journalist Have to Pay For His Actions?" 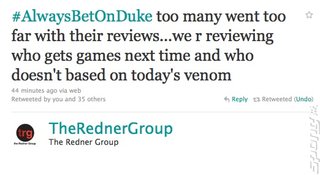 Jim - theRednerGroup - Redner, is a one man operation despite the word 'group' in his company name. He works in the public library sometimes when he is bored with his bedroom-turned-office. He's also the guy sacked for tweeting in anger about a negative Duke Nukem Forever review.

He reckons that the journalist who wrote the bad review of Duke Nukem Forever that got theRednerGroup to tweet and the got it ditched by 2K should pay for his actions.

He's been given the opportunity by Wired to tell his side of the story. To give you some idea of the sheer weight of words he uses, the phrase "At this point I would like to address my tweet and give you a behind the scenes look at theRednerGroup?s reviews process" occurs some 980 words in.

Jim really gets to the nub of the one review that forced him to 'brain fart' and tweet that his 'Group' was "reviewing who gets games next time and who doesn't based on today's venom". The tweet has been removed.

"Hardworking people, including myself, spent thousands of hours away from family and friends working on Duke Nukem Forever.

"The game is what it is, but we poured our hearts into bringing the game back from video game purgatory. That single story hurt and I acted rashly, vented my frustration and I am paying for my actions, more so than you know. Shouldn?t the journalist have to pay for his? Should I continue to support him?"

Say what? He tries to clarify.

Don't take our word for it though. There are nearly 2.500 words of this over on Wired. Give Jim his due and read the entire thing with all its context here.
Games: Duke Nukem Forever

DrkStr 21 Jun 2011 10:40
1/1
I read his piece and he seems to be saying "unprofessional" reviewers don't deserve games to review. However, this only seems to apply to unprofessionally negative reviews.

How many reviewers has he not "selected" because they unfairly gushed over a game that didn't deserve it?