No, it can?t be?Surely Not! 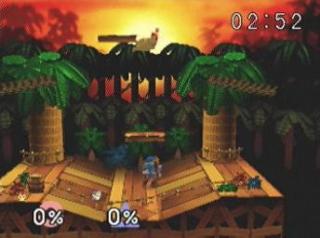 All Images (2) »
We?re sure that you?ve had it up to the eyeballs with the seemingly continuous stream of screens of the GameCube?s Super Smash Brothers Melee, so instead of showing you even more of the same, we?re going back in time. The Nintendo 64 version is the original and best (simply because it?s the only Smash Brothers game available at the moment) and we feel it is worth re-investigating. Described as a four-way fighting frenzy by our resident Nintendo-heads, Super Smash Brothers for the N64 is a light-hearted beat-em-up that works equally well in single player mode.

So, you don?t have to wait until next year for the Smash Brothers experience. It?s yours to buy already, if you can find a copy. Here's a pair of screenshots from the N64 Smash Brothers game, and we promise, no more Melee screens: well, not until next month!