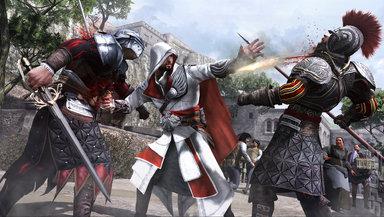 Not had your fill of Ezio Auditore da Firenze? Not had a chance to experience his second adventure in Assassin's Creed: Brotherhood? Well Ubisoft has just announced that it will be releasing a special Da Vinci Edition set for the PS3 and Xbox 360 for release on 25th March.

Adding a new single-player campaign as well as additional multiplayer features, the add-on will be available on its tod via the PlayStation Network and Xbox Live Arcade Marketplace for 800 Microsoft Points (or Ł6.85).

If you need the game to go with the expansion however, you can pick up the Da Vinci Edition in just a few weeks time for the obviously bargainous price of Ł49.99.
Companies: Ubisoft
Games: Assassin's Creed: Brotherhood