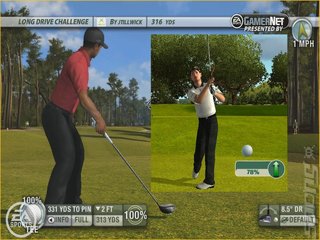 360 and Wii: can you guess which is which?
The Advertising Standards Authority has deemed that a recent TV advert for Tiger Woods PGA Tour 09 can't be broadcast any longer.

According to the ASA, "A viewer complained that the background footage, which he believed was taken from the Xbox 360 version of the game, gave a misleading impression of the quality of graphics achievable from the Wii version."

It continues, "Electronic Arts confirmed that the footage in the ad was taken from the Xbox 360 version of the game. They pointed out that Tiger Woods was seen using a Wiimote throughout the ad and the only branding at the end of the ad was that of Nintendo Wii. They said, to avoid any confusion, they added text to inform viewers that the game was available on all formats. Electronic Arts maintained that they were demonstrating game action that was possible on all formats and did not show any gameplay that was impossible on a Wii.

Finally, " Although we (the ASA) acknowledged that the message "AVAILABLE ON ALL FORMATS" appeared in the final scene, we considered that viewers would infer from the ad that Tiger Woods was playing the game on a Wii console and the graphics shown behind him were representative of the actual game he was playing. We also considered that the Wii logo at the end of the ad reinforced that impression. Because viewers would not be able to achieve the graphical quality shown in the ad on a Wii console, we concluded that the ad was misleading."

So, the ad has been pulled. Only one complaint though? Looks to us as if the graphics whores in the gamer community have simply given up watching telly.