A solid, if slightly uninspiring, start to E3 2007 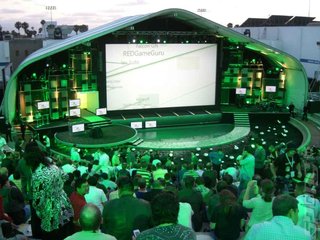 All Images (18) »
Microsoft E3 press briefing, held at an impressive amphitheatre in the grounds of Santa Monica High School, (pictured), saw a clear emphasis on the 360's admittedly impressive software line-up for this year?s ?Holiday season? (that?s Christmas to us Brits).

Following a slightly embarrassing rendition of some music from Halo from a bunch of teenagers - fronted by a crazed violinist who thought she was Steve Vai - Microsoft?s Peter Moore (pictured below) kicked off proceedings by jamming with the guys from Harmonix on their forthcoming Rock Band game.

Rock Band looks like great fun. While it?s hardly groundbreaking stuff - it takes the Guitar Hero blueprint and adds in bass, drums and vocals, using both contemporary and classic, original rock tunes - it does it all very well (as you would expect, having been put together by the original Guitar Hero team at Harmonix).

New game announcements, while thin on the ground, focused on casual and family gaming. Brand new titles include quiz game Scene It (featuring its own buzzer style controllers) and mini/party-game collection Viva Pińata Party (curiously NOT being developed by Rare).

Again, Microsoft could (and no doubt will) be accused of copying Sony?s blueprint here with its Buzz series of quizzes (the Scene It controller basically looked like a much-improved version of the Buzz controllers). While quiz games that appeal to all of the family are hardly a new idea, if executed well (as this is), this could easily clean up this coming Christmas.

With plenty of nods to family and casual gaming, Microsoft certainly didn?t forget to throw the hardcore crowd a few bones with impressive new Mass Effect and Halo 3 trailers and a stunning Call of Duty 4: Modern Warfare demo , not to mention a tantalising (if short) trailer for Capcom?s Resident Evil 5 (due sometime in 2008). We?ll find out a lot more about Resident Evil 5 in the coming days ? or die trying.

We also saw the lovely Jade Raymond from Ubisoft demoing a new (and annoyingly buggy) level of Assassin?s Creed; and a short glimpse at the very cool looking motorbikes in Project Gotham Racing 4 from the guys at Bizarre Creations.

Xbox Live
On then to Xbox Live, which Microsoft is confident should have over 10 million subscribers (up from the current seven million) this time next year. We got a brief glimpse of forthcoming Xbox Live Arcade (XBLA) games including Bomberman, Mizuguchi?s Every Extend Extra Extreme, Puzzle Fighter, and two new SEGA classics Sonic the Hedgehog and Golden Axe - both available now.

In terms of downloadable HD video content, a new deal with Disney was announced and ? more excitingly - HD movies via Xbox Live will finally make their way to Europe and Canada later in 2007. Oh, and we will also get the 120GB Xbox 360 Elite over in Europe later this summer (August 24th to be exact).

Microsoft Game Studios VP Shane Kim was very proud to show off a new trailer of Japanese RPG Lost Odyssey from Mistwalker, as well as announcing (with an ironic ?surprise!?) that Gears of War and Viva Pinata would both be coming to Windows Vista and (thankfully) XP.

All in, a solid (if slightly uninspiring) showing for Microsoft and, while there were no major BIG announcements, a pretty good start to Min-E3 2007.

Its so great being able to access Golden Axe and Sonic now. Resident Evil 5 was a nice surprise.

No announcement on MGS. Seems Konami want to keep gagged on it, probably for fear of Sony's wrath or money exchanged. We all know its coming, but Konami don't have the ball to say so, but they do strangely seem to be confident enough about PS3's price cut not being enough. Mixed messages indeed.

I heard elsewhere that Konami might be forced to make MGS multiformat, as they are loosing so much money when it could be on sale, on 360 and possibly Wii too (now that would be shocking)

However, watching Mario dressed like a bee is a shimmer of light...togheter with Ninty exec fun with WiiFit