Yes, the dog that ate Nintendogs... 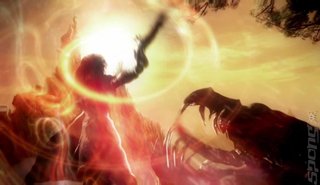 So, here we are with Day Two of our ?GDC 07 Highlights?. Obviously by the time you read this, it will already be Day Two, well truth be told the reasons for that are two fold: a) the news you are about to read RE: Fable 2 was embargoed until today and b) I, your faithful servant, I got monstrously ?involved? at a major party involving some senior execs from an unnamed platform holder. That said, on with the show.

The most anticipated, and rightfully so, event of the day was our time with the legendary foot-in-mouther, Peter Molyneux. Noted for his ground breaking work on Populous and Black & White, Peter has had to try very hard to remain quiet about his most recent project.

Developed for Microsoft game studios Fable 2 will supposedly offer all the things that were promised in Fable, but not delivered, and then some. As you may have well read by now, there is a dog. What I can not stress enough, however, is that after seeing and interacting with said dog, I truly believe it to be a stroke of genius.

I was initially sceptical, as we have learned to take all the things Peter says with a grain of salt, but after just a few minutes of seeing him play around I, and the rest of the small audience for the matter, were absolutely in love with the thing.

Listening to Mr Molynuex talk about his project is a very interesting experience. After much thought he finally came to conclude that "love" was the key element that is lacking in so many games, but it is the thing that makes some games, like Ico and Final Fantasy XII so memorable.

Warning Ico Spoiler Ahoy!
"When that girl saves you from the water, I really cared" said Mr Molyneux in regard to the end of Ico (sorry to have spoiled that for anyone). His first idea on how to really get the payer to care was to use the children that never managed to make it into Fable.

The idea was nixed in the original because when you had children that had got near adulthood you were able to take over their lives if you died. Most of the testers would apparently make kids as a way to have unlimited lives, and therefore they were very unattached to them as characters. That approach will not be an option in Fable 2. What will be there now is the responsibility of having a family and the reward for being good at it.

"First it?s just a baby and it keeps getting a bit older and more interesting, then one day you're out adventuring and you come home and there?s this little kid going, 'Daddy, daddy, I heard you killed a bunch of scorpions!' It's just great," according to Mr. Molyneux.

At this point I was not really sold on the idea, but Molyneux then went on to explain that something like children that can only be mildly worked into the story aren?t going to be the best way to really grip a player.

It was then that he brought out the most adorable/least annoying virtual dog you've ever seen. Yes, cuter than a Nintendog. Besides having excellent animations that blended beautifully together with no odd stopping or jumping, it was very well modelled and even fuzzy. Apparently depending on how good or evil you are, your dog will look more like a German Shepherd or a Rottweiler. As Peter seems to be kind of middle of the road he had a fluffy shaggy mutt-looking thing.

So, because SPOnG has already fallen for Nintendogs, what?s the big difference here? Well as I stated, it?s less annoying for one. It is absolutely imperative that the dog be nothing but helpful and never, ever bothersome or cumbersome; to achieve this, the dog has a very complex AI that reacts to all of your actions accordingly. If you stop to talk to someone, the hound will sit or lay down or run around nearby, but never very far. If you start to run, so does he. Want to play with him? Pick up something, pop up the mannerism for teasing him, then throw the object and off he goes; all very natural.

One of the cleverest bits, and the thing that leads to me believing Molynuex is a mad genius, and not just mad, was the dogs reactions in battle. To demonstrate, there was a pack of little gobliny things, one with a sword, one with an axe and one with a gun. The dog knows which weapon your character is wielding at any time, and will go for one of the enemies with a different weapon. So if you have a sword out, he will immediately try and disable the enemy with the gun. While demonstrating this Peter?s best friend was wounded unfortunately, so Mr Molyneux decided to really tug at our heart strings. Upon being injured the dog takes up a rather pathetic whimper and limp. In keeping with the "least annoying" tag, Peter then demonstrated how you could, rather than bother with it, "just walk away..."

He kept the camera focused on the dog as it shambled toward his character, who was walking off into the distance. The dog continued to limp behind, slowly trying to catch up.

"So, you could just go on ahead and head to town. Go to the pub and have a drink. Then, hours later, you hear a scratch at the door... someone will go to check and ask, 'Who would do such a thing to an animal?' and then the people will know it was you and their opinion of you will lessen".

Consequences for your actions, the kind that could really cause a person pause for thought. Brilliant! Plus watching Peter as he mimes a dog scratching at a door is just a glorious experience.

So, to sum up, take all the cute and lovable doggyness of a Nintendog, throw in an epic journey and let that cute, loveable creature lay his life on the line to protect you. It accompanies you though thick and thin, in and out of all sort of horrible situations, and it?s always there, your best friend.

Toward the end of the presentation Peter began to talk about how he knows that Fable was a bit of a disappointment and how he is very self-critical. Most startling of all was when he decided to admit that, "perhaps, if I don?t get this one right I mean, if its not truly revolutionary and fantastic, perhaps I?m in the wrong business."

Personally, I was completely taken in by Fable over the course of its development, so I very genuinely hope he has learned his lessons and will make the brilliant game he so desperately wanted to make last time. Besides, gaming news would be a whole lot less fun without Mr. Molyneux around.