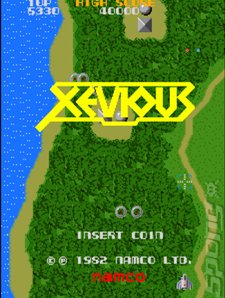 Nintendo is to release 36 retro beauties on Wii?s Virtual Console service in the first quarter of 2007 (up to the end of March), as SPOnG informed you earlier this week.

These games will trickle out on to the Wii Shop Channel every Friday, which in SPOnG?s opinion is a great way to start the weekend. Almost as good as a bellyful of chemically-enhanced strong, continental lager and a vindaloo. But not quite.

For those who weren?t born in the 1960s or 70s, Xevious in the arcade used an 8-way joystick with which the player/pilot navigated a combat aircraft called a Solvalou, armed with a forward-firing "zapper" for aerial targets and an unlimited "blaster" to hit ground targets.

The wonderful thing about the game (at the time, at least) was the way in which it seemed to play as one continuous seemingly never ending level, with random huge motherships appearing every now and then, which took an equal amount of skill, determination and a steady supply of ten pence pieces to learn how to kill.

Fact fans might also be interested to learn that the original arcade version was the first arcade game to have a TV ad in the US (with the strap: "Are you devious enough to beat Xevious?").
Whether the game will stand the test of time after we?ve removed our rose-tinted nostalgia-specs remains to be seen though.
Right now, we?re off to buy it for a measly 500 Wii points (around Ł3.75) to see how it plays.

sneakyduck 12 Jan 2007 13:00
2/5
What are you complaining about? At least you've got a Wii! Spare a thought for us poor sods who're still trying to get our hands on one of the damn things.
more comments below our sponsor's message

I mean - why didn't you pre-order?


I snapped one up at GAME back at the beginning of October and they made damn sure that I had my console come Dec 8th.

You've only yourself to blame...

Whatleydude 13 Jan 2007 16:24
5/5
tyrion wrote:
I know of at least one person who pre-ordered in October and still hasn't received their Wii.

You sure got an unlucky mate..