Now everybody and their dad will be bursting for a Wii. 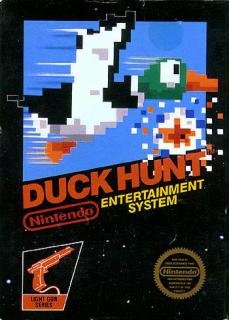 The ESRB has approved and rated eight more titles which will bolster the Wii?s cheeky little answer to Xbox Live Arcade this coming January. Each and every title is sure to strike a nostalgia-chord with those gamers who remember the N64 or even the arcade originals of these classic franchises.

The eight titles in question are as follows:

While official word is still to come from Nintendo, this seems to be in line with the company?s stated claims of releasing around ten new Virtual Console titles per month.

SPOnG-News spoke to our dad this morning about the possibility of him playing Duck Hunt, his all-time arcade favourite, on the Wii this Christmas:

SPOnG: ?What do you think to the Wii, the new games console from Nintendo coming out for this Christmas??

SPOnG: ?Yes, well, that?s a different matter entirely, but the news today is that you will be able to download and play arcade classic games on it, including that game they used to have in the pub called Duck Hunt.?

Our Dad: ?Oh yes, the one with the gun. I like that. Though you had to be careful about how you said the name when you?d had a drink I remember??

SPOnG: ?So, do you think the fact that you can play arcade classics on your TV with Nintendo?s Wii would make you consider buying one for yourself??

Our Dad: ?Are they bothered about older people like me buying and playing games??

SPOnG: ?Yes, that?s part of their new marketing strategy. They want to appeal to markets beyond the traditional teen/twenty-something male.?

Our Dad: ?Oh, that?s interesting. I?ll probably buy one for your sister and play it myself in that case then! Do you get a gun with it too??

Aha! An interesting question dad, and one that SPOnG will be asking Nintendo when we finally manage to get hold of them over at the Wii House later today.

It can only be a matter of time before Nintendo officially announces release of the prototype gun-shaped Wii-mote holder we?ve seen at various events from E3 onwards (pictured right). Surely a Duck Hunt essential?

Wii?s Virtual Console titles will be priced at 500 Wii Points for NES games, 600 for TurboGrafx-16 titles, 800 for SNES and Megadrive games and 1000 for the N64 classics.

With Duck Hunt, I hope they release a version of the gun adapter that is orange.

The prices aren't too bad, but I would have either wanted them a bit lower, or I'd want the games to come in a cardboard box... Pfff, I'll be buying new games instead, anyway! (i.e. NES Zelda vs. Twilight Princess, see...)