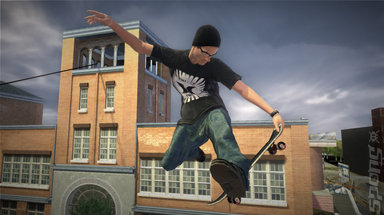 All Images (4) »
The good people of Activision inform SPOnG that our favourite skateboarding game, Tony Hawk?s Project 8, is to make full use of (or 'leverage' if you prefer Corpo-Speak) Sony?s SIXAXIS wireless PS3 controller. This has sent a tiny scintilla of an excited shiver down our spine.

Using the SIXAXIS you will be able to ?balance and steer skaters through every rail grind, manual, revert, ollie and combo, as well as control slow motion nail the trick moves?, it says here.

Almost suddenly, like some kind of revelation from the gods (That?ll be an epiphany then, Prolix ed.) , the SIXAXIS makes sense. Providing it works of course, with mixed early reports from SPOnG?s writers who have managed to get hands-on time in recent months.

See why we are getting more than a little excited about next gen Hawk from our recent Tony Hawk's Project 8 preview, and check out our THP8 game page for all relevant info, art and assets on the game.

Each of the well-known skaters in the game were captured using three-dimensional body and face scanning technology, as well as motion capture data, as we have already seen from the series of teaser videos trickling out since E3.

Welcome to the next gen!