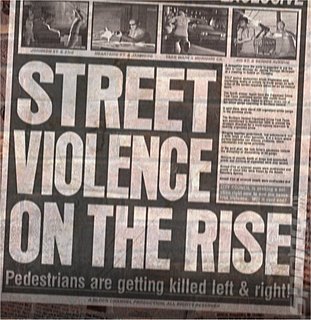 All Images (9) »
Saint?s Row is described as a free-roaming, urban mayhem game with online as well as single-player gameplay. So it?s basically like Grand Theft Auto, but online. And better than GTA, if we are to believe publisher THQ and developer Volition.

Well, we?ll reserve judgement on that, thankyou very much, until we finally get to play the game when it?s released on Xbox 360 this September.

We?ve also just heard that a whopping great Saint?s Row demo will be going up on Xbox Live on August 1, so you?ll be able to get a full taster to see if it truly is a GTA-beater or a GTA-Lite a good month before it?s on the shelves.

IGN did report that the game had ?framerate issues? back at GDC 06 in San Jose, which if ironed out, might seriously make it a contender.

The game is based in the fictional urban surroundings of Still Water and you play as a member of the Third Street Saints, a gang trying desperately to take back the streets from three rival gangs that hold the city.

Saint?s Row is "an evolution in open world game design and breaks the mould, pushing the genre in a new direction of choice and consequence," according to Jack Sorensen, executive vice president of worldwide studios, THQ. But then, he would say that. Check out the latest screens to the right of this news.

You can also download the latest trailer which we?ve just been sent by the good people of THQ, by clicking the link right here:

See the dedicated Saint?s Row page on SPOnG for all the latest news and asset updates.

In other THQ news, you might be interested to know that we?ve also just received the latest trailers on their next-gen warfare title Frontlines: Fuel of War (due 2007, click for more Frontlines: Fuel of War info on SPOnG here) and their just-about-to-release PC RPG Titan Quest (click for more Titan Quest info on SPOnG here). Check trailers on one or both by clicking one of the links below:

thane_jaw 29 Jun 2006 11:12
1/3
I was really interested in this prior to christmas, but the slippage has completely put me off and Crackdown looks like more fun and is coming out at a comparable time (Crackdown looks quite like Spiderman 2 in gameplay style and freeform playability, which I personally loved). I think this might be a case where releasing a demo on Live, so everyone can go "wow! its like gta only smaller and you can't fly planes", might hurt sales. They really need to differentiate themselves from both GTA and Crackdown to stand out and without GTA's compelling storyline (or at least missions ripped off from movies) I'm not sure they can improve upon the gameplay enough to warrent anyone saying its anything but GTA lite with pretty graphics.

GTA you have a lot to answer for, now everyone wants to be gangbanger.

That's pretty much why I'm looking forward to Crackdown more. Its got a unique art style and looks like more of a freeform superhero game with guns then a crime simulator. I was mainly looking forward to the multiplayer part of Saint's Row, but Crackdown's looks a whole lot cooler.

Having said that I'll be waiting for some serious metacritic love before I purchase either of them.