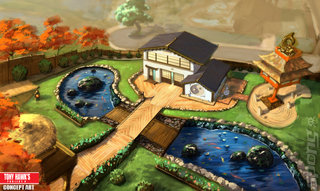 All Images (7) »
Activision has just shipped over a bunch of concept art for Tony Hawk?s Project 8, due out on PS3 and Xbox 360 later this year, as well as on current gen consoles and PSP.

Perhaps one of the coolest motion capture demos we?ve ever seen is that of the skateboard tricks video the publisher was showing off on it?s E3 booth. To see incredible skaters all decked out in skin-tight motion capture suits, pulling off some of the tricksiest kickflips and ollies just blew our minds. Just take a look at the HD video here;

The video subtly reminded us that, had we even attempted to become a professional skateboarder, back when we were thirteen and the idea seemed like a valid one, we still would not have been as good at skating as some of the guys used in the motion capture for this game.

Activision and Neversoft keep pumping out these outstanding skateboarding videogames, this one is promising all the usual stuff you would expect from a next gen title - ultra-realistic graphics, enhanced physics and extremely responsive controls and so on (and, as Keith Stuart over on the Guardian dryly notes today ?publishers of next-gen games are really going to have to find new and interesting ways of saying this stuff?).

The new stuff Activision is promising us is...

- Filmer and Photo Goals - On the way to #1 pro-skater status, players must trick through photo shoot locations, or follow a filmer with a video camera and complete his instructions while keeping up with him.

- "Picture-in-a-Picture" - Player can watch gameplay unfold on the main screen while observing the action on film in a superimposed video box.

- "Movable Ramps and Rails throughout the city" - Place ramps and rails to set up amazing lines and/or gain access to secret spots.

- "Impress the Locals" - For the first time ever, players must impress in-game citizens and pedestrians to build up respect. The pedestrians watch players perform tricks, laugh at brutal bails and punch players in the gut for knocking into them.

Now, where is that knee, elbow, back and arse armour? This old crumbly feels the urge to skate...